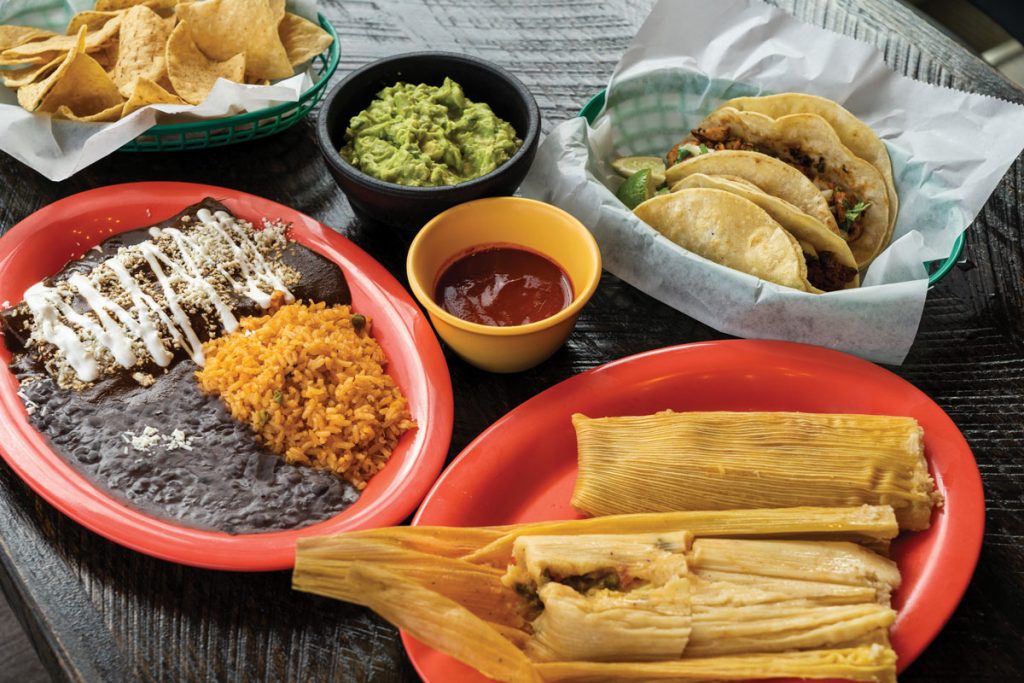 ArchiveLCM Articles
Posted on May 20, 2020June 15, 2021 by Rochelle A. Shenk and Photography by Nick Gould in Archive · LCM Articles

Lucila “Lucy” Gomez Lucero has been treating Lancaster to a taste of Mexico for the last 17 years. Starting out in a tiny space on North Prince Street, Cocina Mexicana’s new and larger location is part of the revitalization of North Water Street.

Lucy grew up in a small town in the state of Puebla, Mexico, which has a rich culinary tradition and a storied past. If Puebla rings a bell, you’re probably familiar with Cinco de Mayo, which commemorates the battle between French forces and the Mexican Army for Puebla on May 5, 1862. The resulting celebrations, which began in Puebla and spread to California, the American Southwest and today, much of the United States, entail parades, food, drink, dancing and even battle reenactments. (All of Mexico celebrates Independence Day on September 16.)

Undoubtedly, many celebrations include the region’s best-known foods, including chile rellenos (stuffed peppers) and mole, a flavorful sauce made with a variety of spices and even chocolate. Lucy’s childhood memories entail simple food and sharing meals together as a family. The warm, inviting, family feel is what guided her in developing Cocina Mexicana, which opened about 17 years ago in a cozy space along North Prince Street near the Fulton Opera House and Millersville University’s Ware Center.

In early 2019, the restaurant moved to a larger space along North Water Street, where it is adjacent to Columbia Kettle Works 2nd Gear Taproom and Zoetropolis Cinema Stillhouse. “We still have a number of guests who come in before theater events and during First Friday,” Lucy says.

“This is a great space,” she says of the location. “We did some renovations before we opened. It was fun to work with all this room.” Large windows admit natural light and provide a view of the busy street. Brightly colored Mexican serapes serve as upholstery for benches placed along the windows. The dark wood tables were crafted by her brother. Colorful napkin holders, some shaped like fruit, top the tables. Planters add an additional splash of color. Although the floor looks like wood, Lucy says it’s actually ceramic tile. Behind the take-out counter, a tile mural, which is surrounded by a sea of blue tiles, serves as a reminder that colorful Talavera tiles are produced in the Puebla area.

The restaurant seats about 55, which nearly doubles the capacity of the previous location. An interior door connects Cocina Mexicana to Columbia Kettle Works 2nd Gear. “We don’t serve alcohol, but guests can BYOB. It’s handy to have the Kettle Works next door – often our guests will purchase something there and then come here for their meal,” she explains, adding that Cocina Mexicana, Columbia Kettle Works and Zoetropolis all share a courtyard that provides seasonal outdoor dining.

Cocina Mexicana’s menu stays true to Lucy’s roots. “Our menu has evolved over the years – initially we had only a few dishes,” she explains. “We’ve expanded, but everything I cook is the way it’s prepared in Mexico – we use the same type of tomatoes, and jalapeños,” she says.

Popular menu items include tacos, which are made with soft corn tortillas and a wide variety of fillings including grilled pork with pineapple, beef tongue and fried shrimp. Freshly made guacamole is also a customer favorite. The menu also features appetizers (ranging from chips and salsa to quesadillas and tostada), sandwiches, soups, salads, burritos, enchiladas, huevos (eggs) and a number of beef, chicken, pork and seafood-based platters (all are accompanied by Mexican rice, pinto or black beans and tortillas). There are a number of vegetarian options on the menu such as chile relleno. The drink selection includes Mexican sodas, bottled water and specialty drinks such as Agua de Jamaica, which is made with the petals of hibiscus flowers. In addition to table service, the restaurant offers take-out, delivery (through delivery.com.) and a catering menu for special events.

Like all restaurants across the state, Cocina Mexicana closed its doors in March in order to contend with the coronavirus emergency.  Before closing, Lucy donated food to Saint Anne’s Brown Bag Lunch Program. Nonetheless, she is looking to the future – she hopes to extend the restaurant’s hours to 11 p.m. on Fridays and Saturdays (in conjunction with Columbia Kettle Works) and offer a limited menu for late night.