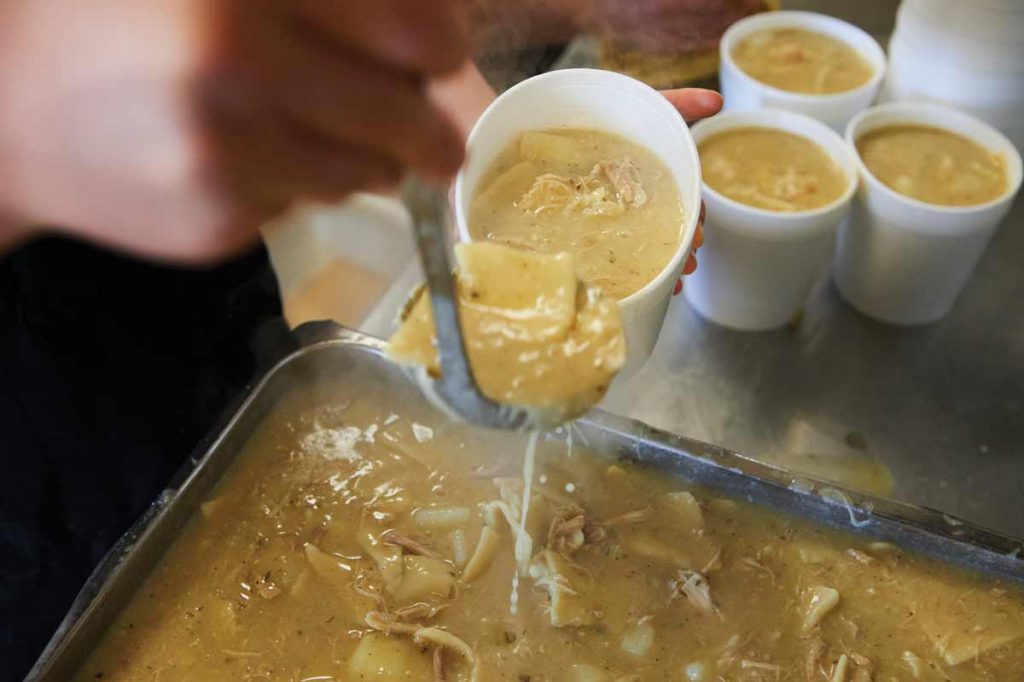 Originally published in the February 2021 issue of LCM

This Lancaster County staple is often the “money-maker” for area fire companies that sponsor benefit dinners. Dig a little deeper and you’ll discover it’s also what helps to bring a community together. For the most part, the pandemic unfortunately caused the cancellation of these time-honored benefits during 2020. As we welcome a new year, many companies are hopeful that they will be able to get back on track. One company that vows to carry on with its fundraiser – in one way or another – is the Hand-in-Hand Fire Company in Bird-in-Hand, whose chicken pot pie dinner has become legendary. To be honest, I have always considered chicken pot pie to be somewhat dull. The pastry is often overcooked and mushy (or undercooked and rubbery), the chicken flavorless and seasonings wanting. As a result, despite being a local, I never understood what the hoopla over chicken pot pie was about.

That all changed three years ago, when a friend waxed poetic about having the “best chicken pot pie of her life” at Hand-in-Hand Fire Company.

Feeling the meal was undeserving of such praise, my eyebrows furled. However, over the years, I’ve learned to trust her opinion (she’s usually right – just don’t tell her I said that). So, I added the 2019 Chicken Pot Pie dinner to my calendar and decided to check it out.

My moment of reckoning came on an overcast February morning, during week two of what would be a three-week-long battle with something akin to bronchitis. Cold, tired and under the weather, a hot, hearty meal was just what the doctor ordered. Because of being sick, my first experience at Hand-in-Hand’s chicken pot pie event was their drive-through option. A family-style dinner and buffet are offered inside.

A drive-through for a fire company event? Yes, I, too, was surprised that such a convenient option existed. My fiancée, Jessica, and I were met by young, enthusiastic members of the Amish community who stood at a tiny wooden shed selling tickets. With some hesitancy on the part of my driver, I purchased four quarts of chicken pot pie and handed over the dough.

Our car moved along the queue and eventually arrived at a table stacked high with piping-hot containers of chicken pot pie. With a gallon of the goods in hand, and on the verge of being hangry, Jessica and I headed home, eager for a hearty, stick-to-your-ribs feast on a dreary winter’s day.

The return trip to Ephrata seemed notably longer as our mouths frothed like ravenous beasts at the delightful aroma that filled the car. Settling in at home, I split a quart between two bowls. Pepper cabbage and buttered bread made for perfect side dishes.

To my delight, never had I devoured chicken pot pie with such robust flavor. The pastry was tender but not mushy and vaguely tasted like chicken, stretching the flavor of meat into lesser ingredients, similar to a proper bowl of jambalaya. Uncommon quality was carried throughout the piping-hot bowl – even the potatoes were cooked to melt-in-your-mouth perfection.

With one quart swiftly consumed, two more went into the freezer, while the fourth made it to the fridge for the next day. (After a 24-hour soak, the pastry had absorbed the rest of the chicken stock and completed its chrysalis-like transformation, so I added my homemade chicken stock to elevate it to its previous liquified state.)

This was exceptional, a perfect winter meal. I needed to know what made it so delicious but had to wait another year to find out.

In February 2020, I reached out to Hand-in-Hand Fire Company, whose members invited me to spend two days with them as they cooked. I learned that the annual family-style dinner started in 1994, when the Pennsylvania Dutch Convention & Visitors Bureau (now known as Discover Lancaster) approached the fire company with the idea of having them prepare and host a chicken pot pie dinner as part of the Pennsylvania Dutch Food Festival, an event designed to entice people to visit Lancaster County during what was then a slow season for its members. Proceeds would benefit the fire company and the Clinic for Special Children in Strasburg.

To prepare for the endeavor, two incognito fire company volunteers scoured the county in an effort to taste-test chicken pot pie and determine how much would be needed for the proposed event. Closer to the event, they bribed the Today Show’s Willard Scott with shoo-fly pies and fire company T-shirts in the hopes he would plug the dinner during one of his weather forecasts. Willard obliged, enticing visitors from as far away as Virginia and Ohio (and surrounding states) to make the trip to Bird-in-Hand over President’s Day weekend.

While the festival is no longer held, the chicken pot pie dinner has become a cornerstone of the support that keeps the volunteer fire company running. (The dinner is now held the Saturday after President’s Day.) Sales of chicken pot pie help to provide the fire company with equipment and training essential to safely serving the community.

The fire company has been instrumental in conducting searches for the still-missing Amish teen, Linda Stoltzfoos, who disappeared while walking home from church services in June 2020. Conducting the search required a significant and diverse use of non-firefighting resources. From printing posters to utilizing their large commercial kitchen to feed volunteers, the fire company’s facilities served as a hub for countless activities.

Like many such dinners, Hand-in-Hand relies on the community to help prepare and manage its chicken pot pie dinner. In Bird-in-Hand, the majority of the volunteers for the dinner are Amish. (They also comprise a majority of the company’s first responders.) Volunteers from the English community are also plentiful. The volunteers do prep work, cook, set up the dining areas, greet visitors, direct traffic and contribute such items as homemade bread and desserts (the pies are amazing!).

According to Tim Hoerner, president of Hand-in-Hand Fire Company, “It’s the community’s way of doing their part, enabling firefighters to take care of everyone.” Tim was a volunteer in the early years of the dinner, picking up the boxes of peeping chicks from the post office and delivering them to the farm where they’d be raised.

Preparations for cooking the chicken pot pie largely take place over two days and start a week before the dinner, when, at 10 p.m. on Friday night, five volunteers arrive to cook the chicken throughout the night, with many more hands arriving early Saturday morning.

Typically, 325 locally sourced, pasture-raised chickens are cooked overnight in 40-gallon kettles. For food safety, the chicken and broth must rapidly reach temperatures under 70 degrees in less than two hours and below 39 degrees in under four hours. With such a large volume of food to prepare, it’s a feat made possible through utilizing frigid, winter weather and the addition of fans.

On this particular morning, the temperature is in the teens, allowing the chicken to begin chilling immediately. The broth is captured in food-grade buckets and chilled outside in a specially built trough with cold water flowing through it. Impressively, in a mere 45 minutes, the broth’s temperature drops from near boiling to 60 degrees and falling.

When the meat is chilled, it is separated from the bone by hand and refrigerated. Wisely, the skin is retained and sent through a grinder, a magical ingredient adding richness to the broth.

Indeed, “local” is what helps to take the fire company’s chicken pot pie to another level. In addition to the chickens, the herbs and botanicals used to prepare the chicken pot pie are also locally raised. When it’s available, locally produced organic butter is used. Dinner rolls are supplied by a local bakery.

A week later, Saturday’s dinner starts to unfold. In a kitchen filled with gas stoves, a group of women prepares the potatoes and side dishes, including a crowd favorite,  pepper cabbage. An assembly line of men prepares the dough for the three, 40-gallon kettles rolling with broth and the makings of chicken pot pie. In a previous year, the volunteers prepared the dough two days in advance of the dinner, only to be dissatisfied with the quality it yielded. Therefore, nearly 20 large batches of dough will be rolled, cut and cooked on-demand with amazing proficiency.

Along with many other individuals, Tim introduced me to Jacob King, a former firefighter who helps make pot pie and knows his way around the kitchen. He was especially warm and welcoming, recognizing my interest reached out beyond cooking and into his community. Quite touchingly and unexpectedly, Jake’s interest was reciprocated in learning about me. As we conversed, a few others quietly listened in while working, and I couldn’t help but wish we had time to gather over a meal. However, in a sense, that’s exactly what was happening.

From one week to the next, talking with Jake was what I anticipated most. Discussing values and world views while he and many others rolled dough, it was delightful to converse while watching many helping hands contribute, prompting Jake to point out, “The fire company is not named Bird-in-Hand Fire Company, but Hand-in-Hand Fire Company.”

It was a poignant reminder as to why they invest long hours preparing this food. There is a familial sense among firefighters, but their cause is even greater. When many come together for a common purpose –
in this case, serving and protecting the community –  the synergy of individuals bringing unique gifts to the table creates something beautiful. A community united with the goal to serve one another – without expectation – can make a difference.

I was one of the few English among them, working alongside them in my own way. On the surface, how we live our lives is vastly dissimilar, from basic attire to how we travel and engage with the modern world. This gap includes my profession as a photographer, which for this story, could only represent the community through “helping hands.” However, seeing Amish and English working together reinforced the notion that faith, values and a sense of shared community can transcend social norms. That fact was made obvious when, at the end of the day, vans and emergency vehicles shuttled volunteers home, which was neat to witness.

Self-described by several young Amish volunteer firefighters, their service is a door that helps them to keep one foot planted in the modern world and the other planted in their heritage and values. They regularly sacrifice time away from growing families, farms and businesses in order to look out for their neighbors. “I want to help my neighbor; I want to be a part of something,” are sentiments echoed throughout the room, commitments both genuine and loving.

It is up to us to define our role in the world in which we walk, what we stand for and what we fall for. Looking for and building the bridges that unite us, we can all, and should, find ways to walk hand-in-hand. I intend to do so with gratitude for the best chicken pot pie of my life!

As of press time, details for this year’s dinner were still being worked out. For more information, visit the fire company’s website at bihfire.com; its Facebook page at Bird-in-Hand Fire Company; or call 717-392-0112. The fire station is located at 313 Enterprise Dr. in Bird-in-Hand. Hours for the dinner are typically 10:30 a.m.-6 p.m. (or until sold out).