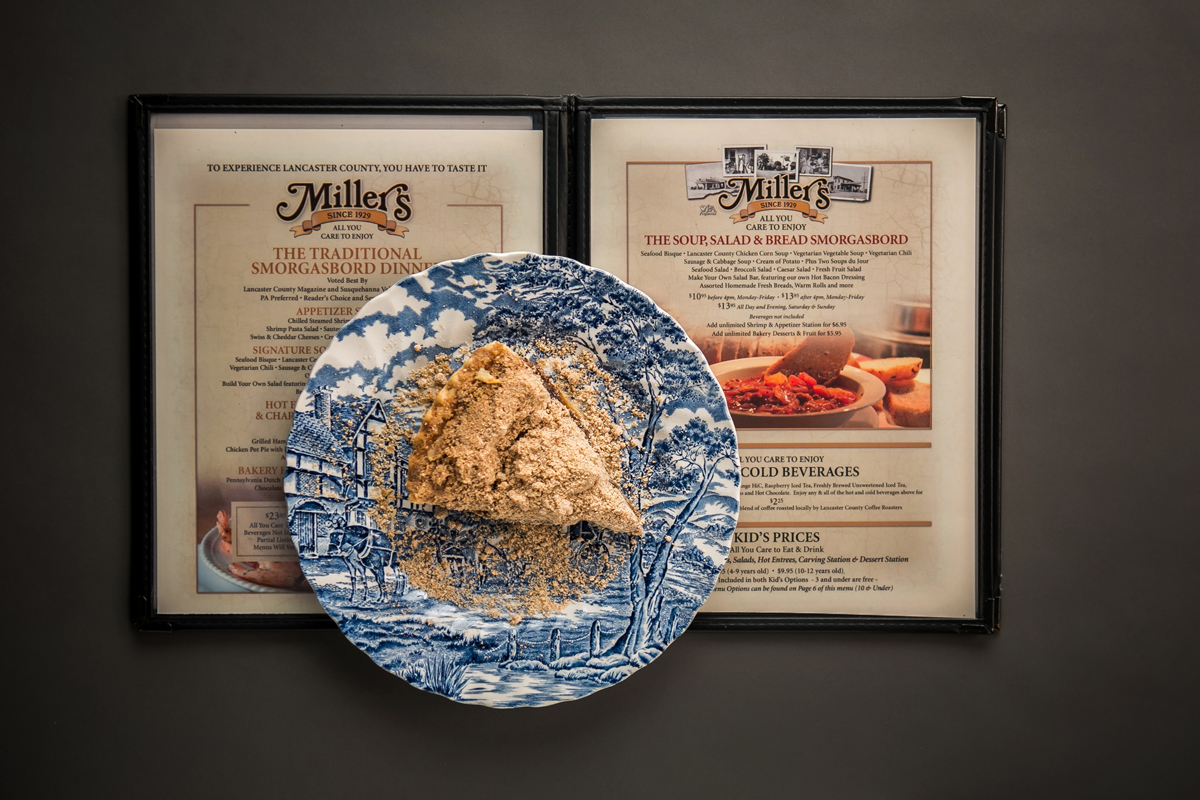 ArchiveFeaturedSmorgasbord
Posted on May 8, 2018June 10, 2019 by Briana Webster Hess and Photography by Nick Gould in Archive · Featured · Smorgasbord

Before hotels, outlet centers and tourist attractions popped up along the historic highway, it was once home to Enos Miller’s truck repair shop. As the story goes, Anna Miller, Enos’s wife, would serve homemade chicken and waffles to drivers while her husband fixed their trucks. Truth be told, the Millers found that they could make more money fixing food than repairing rigs. So, the couple opened a small diner in 1929 that has grown to become one of Lancaster’s most popular restaurants.

Miller’s is widely known for its award-winning smorgasbord, covering everything from soups, salads and breads to meats, vegetables and desserts. But, to truly understand the restaurant’s traditional Pennsylvania-Dutch signature meals, you have to first look at the
area’s roots.

The term Pennsylvania Dutch is derived from the settlers who initially came from German-speaking areas of Europe in the 18th and 19th centuries and spoke a German dialect they referred to as “Deitsch” or “Deutsch”. Over the years, it became misinterpreted as Dutch.

As in most regions of the country, families have passed down recipes from generation to generation, which is why Pennsylvania Dutch country has its traditional sayings, styles and, of course, cuisine.

Ronks, where Miller’s and its associated stores – The Quilt Shop at Miller’s, Gift and Bake Shop, Mount Hope Estate Winery & Gift Shop, and more – are located, is a quaint farming community less than 10 miles from Lancaster City. Known for its Amish and Mennonite population, the area is a popular tourist destination.
When customers arrive at Miller’s, they are greeted by a 1927 Graham Brothers Huckster, which has been transformed to a hostess podium. Old black and white mural-sized photos dating back to an era that saw Prohibition, the Great Depression and the beginnings of World War II, cover nearly every wall in the facility; most are local photographs that have been chosen and printed from either LancasterHistory.org or restaurant archives.

One photo depicts the Thomas E. Strauss family, who took over ownership from the Millers in 1948. According to the company’s history, “Keeping the Miller’s name, the restaurant flourished and, in 1957, they officially changed the name to Miller’s Smorgasbord and began serving their famous ‘seven sweets and seven sours’. In 1975, Miller’s underwent a major expansion, which included upgrading the kitchen facilities and the addition of a second dining room. In 1983, another renovation changed the dining room layout to what you see today.”

The entire restaurant saw a complete overhaul in 2011, changing the décor to provide an environment of what life in Lancaster was like during the 1920s. “I was going for permanence. I was throwing back to what it was like in 1929,” says Bill Moshos, Miller’s director of marketing.

In addition to the life-sized murals, Miller’s also added an exhibition island in the center of the dining area and enabled à la carte menu dining to be offered as well as the smorgasbord.

“We went back to our roots,” says Miller’s Executive Chef and Bakery Manager Steve Gainer, who not only has spent the past 20 years working for the Thomas E. Strauss company, but he is also a native of Lancaster County, born and raised in Lititz. Steve, who with his wife, Sally, once operated his own restaurant, says he’s always had an understanding of food and a desire to cook. Both of his parents were no strangers to the kitchen. “My mom is a fantastic culinary person, and my dad was really into cooking. It’s just something I’ve always been around,” he notes.

And, speaking of food … There’s so much of it! “Ninety percent of the stuff that you’re going to see here is made from scratch. Seven days a week, we cook for the day, every day,” Steve explains.

“Because of the volume and the popularity of Lancaster County, the only way we could really keep up with the demand was to go back to buffet-style dining – a smorgasbord,” Bill explains. “We added on, and it kept getting bigger and bigger. It started out as this tiny little truck stop building and turned into an almost 500-seat restaurant.”

Noticing that “atmosphere and customer comfort are important,” as well, Miller’s reduced the number of seats to the upper 300s to allow customers more space.

“We went back to offering à la carte because we realized the whole marketplace doesn’t want buffet all the time,” Bill states. “We also added a soup and salad component, but it’s not just like two soups; it’s eight soups. Our soup, salad and bread buffet is fabulous.”

It’s not just the amount of food that’s being offered, but the quality of the food being served at Miller’s sets them apart from most buffet-style eateries.

Steve mentions two local farmers – Stephen Beiler and Elmer Fisher – who provide him with the freshest of produce, including corn, tomatoes, zucchini, cabbage, watermelon, cantaloupe and broccoli, just to name a few.

“I try to source as much local stuff as I can, especially in season,” Steve says. “We are just really blessed with excellent soil and the know-how. As it comes in season, as much as I can get from these guys, I do. It’s truly local and farm-to-table foods.”

But, if you’re not in the mood for some Pennsylvania Dutch comfort food, Miller’s also offers other steaming hot alternatives, such as beef burgundy, vegetarian chili and steamed shrimp.

“My kind of saying is, ‘We have the fixin’s, you do the mixin,’ because there’s so many combinations of things that can happen.”