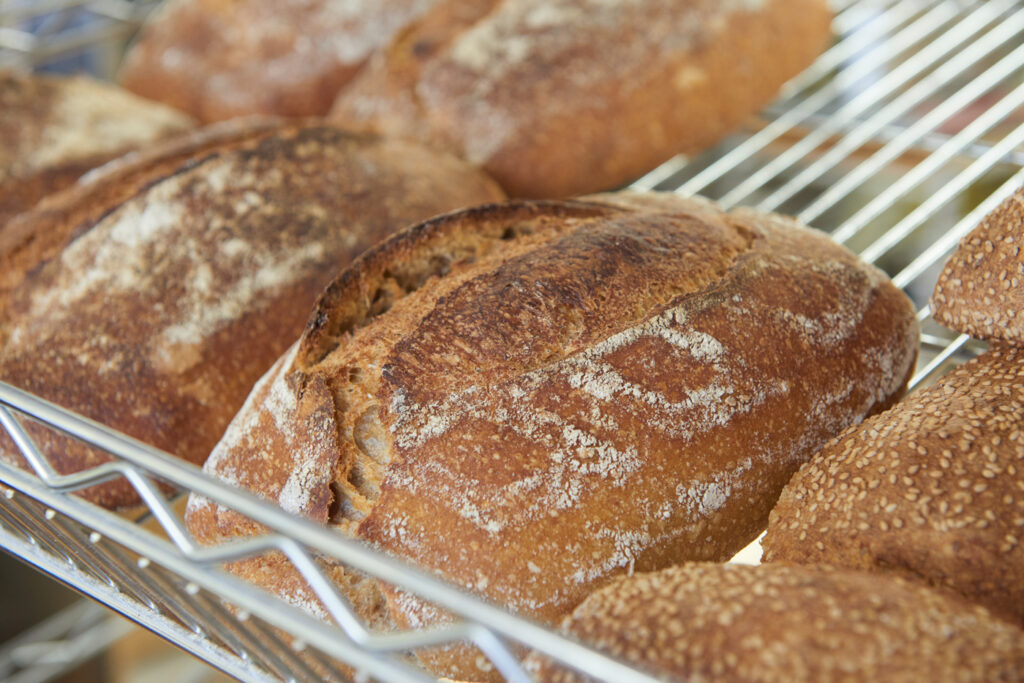 Originally published in the May 2022 issue of Lancaster County Magazine

Earlier this year, Food & Wine magazine presented a state-by-state rundown of the best forward-thinking bread bakers in the country. For Pennsylvania, author David Landsel profiled three such enterprises, including two in Philadelphia and one – Front Porch Baking Co. –  in Millersville.

With summer just around the corner, how fortunate is Lancaster to have access to a talent such as Kristen Richards-Sollenberger? If you’re going on a picnic or doing a tasting at a winery, her bread paired with cheese or topped with jam would be sublime. If guests are arriving for the weekend, her turnovers, muffins and quiche would be perfect additions to brunch. If you’re craving homemade pizza, she can provide you with the dough. If a bash for Mother’s Day or graduation is on your agenda, Front Porch offers cookies and other treats.

Baking sourdough bread was one of many culinary trends that “fed” social media during the height of the pandemic. Successful attempts posted on social media took on the merit of a badge-like achievement. Kristen Richards-Sollenberger, however, took it a step further and committed herself to her passion for baking and her formal training and launched a full-time bakery.

Kristen had known for years that she wanted to bake independently. It’s both a passion that is rooted in family and a career she has developed over time. Much of her knowledge was passed on to her by her maternal grandmother, Nanny Elsie, who taught her how to bake traditional European recipes such as rye bread, pfeffernüsse cookies and stollen, a German spiced cake with fruit that is popular at Christmas. (Elsie, along with her son and daughter, moved to the United States from Germany in the 1950s.) Kristen’s formal training at the Pennsylvania School of Culinary Arts further developed her baking and pastry skillsets. 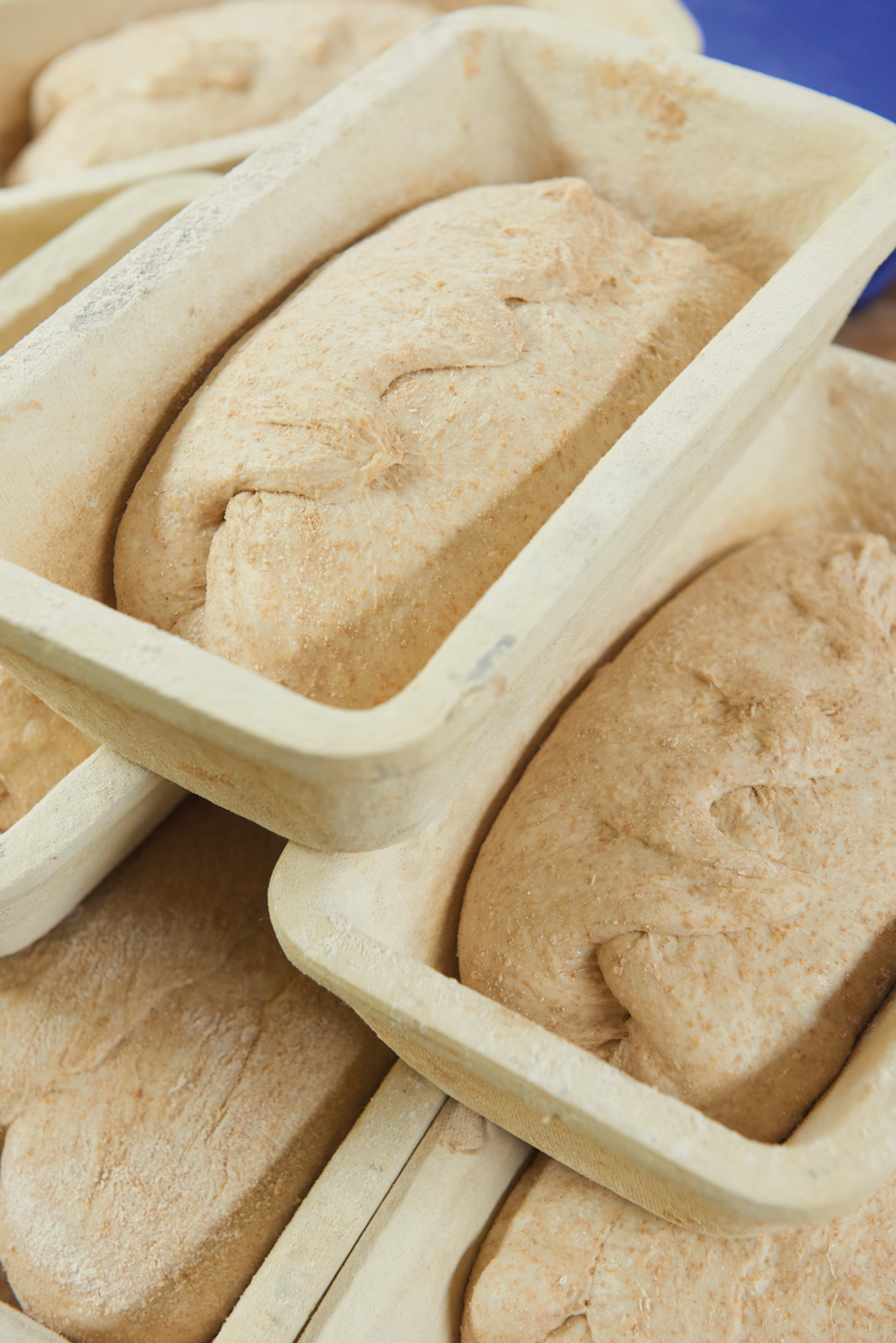 How Kristen came up with the name Front Porch Baking Co. turned out to be apropos. “I had the name [before] the pandemic but it also tied in perfectly with the porch pickups,” Kristen says of the bake sales she held on her front porch and the sense of community they cultivated. “It was so fun to welcome whoever showed up on my front porch,” she recalls. “I never knew who would come by and it led to me developing some great relationships because of it. Anyone could walk onto my front porch for baked goods and I would be there for them at that moment. That’s how we aim to make folks feel.”

When Kristen was laid off from her previous job due to the pandemic, she doubled down and changed her focus. Fortunately, pre-COVID, she had honed her baking skills through attending workshops and sharpened her business skills through courses offered by ASSETS and E-Cornell. 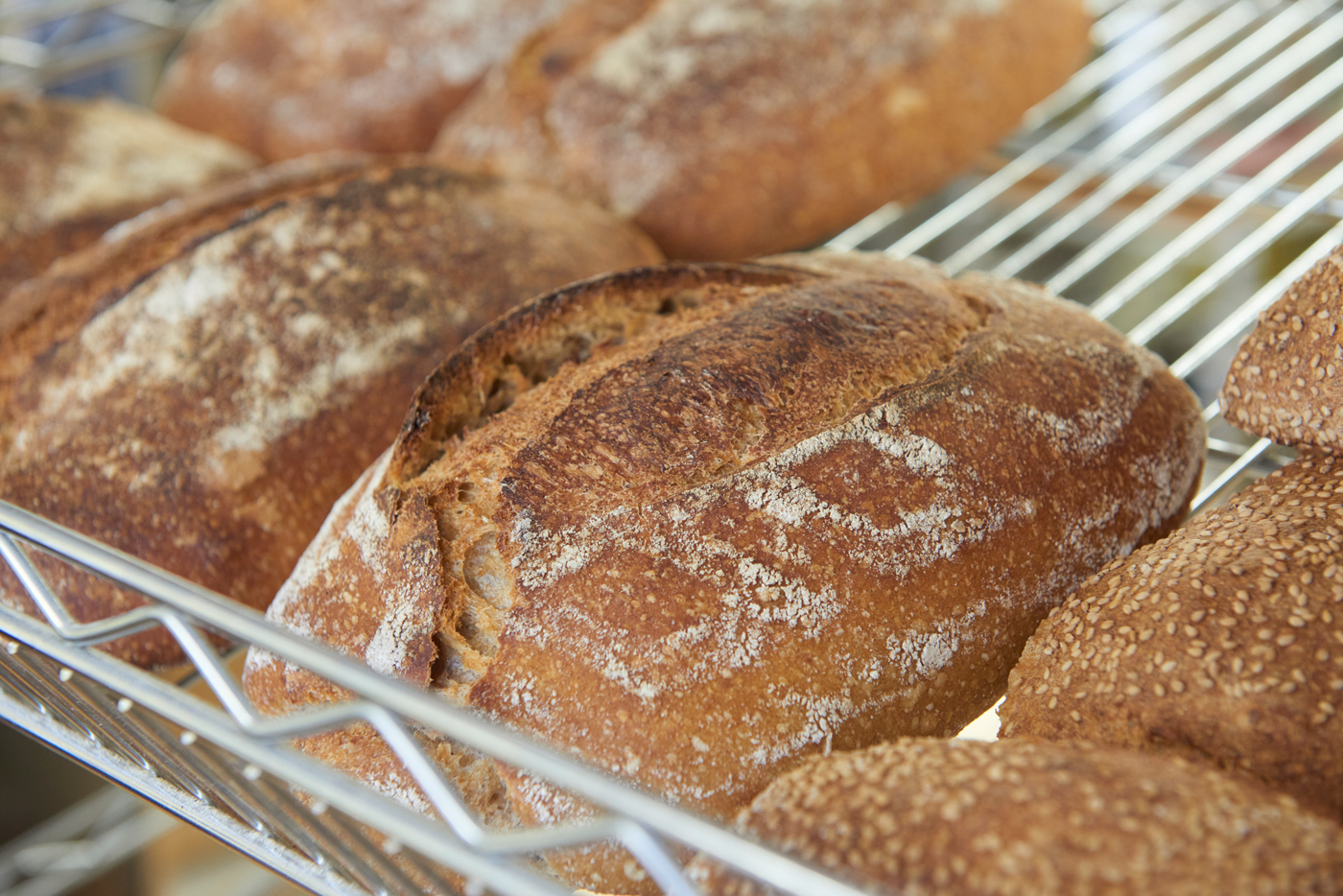 Using a subscription model, Kristen worked to develop a customer base to minimize risk before fully fitting out a bakery. In October 2020, Kristen subleased a 100-square-foot space at Lancaster Marketplace, setting short-term goals that if all else failed, she could sell her equipment to recoup part of her investment. “I’ve found that your customers will find you if you believe in your values and show people that. I honor my values and adapt to whoever comes in the door,” says Kristen.

Six months later and after Lancaster Marketplace closed, Front Porch Baking Co. moved from Kristen’s front porch to a commercial location in Millersville. Kristen, who is a graduate of Penn Manor High School, loves being part of the community. “I want to make people happy with my baking and if I can make a living at it, they should go hand in hand,” says Kristen. Preorder sales and a baking schedule that can be found on Front Porch’s website and social media help customers plan their purchases, stay connected and see what ingredients are coming together to produce a variety of new baked goods daily. “It does help me plan but it gives people preordering a specific day to come in,” says Kristen.

Since opening, Kristen has adapted and grown to meet the needs of her customers and the community. “There weren’t many healthy lunch options in Millersville,” she says, so every Wednesday, Front Porch prepares a soup of the week that usually lasts through Friday. Quiche is another popular lunchtime item. Coffee from Square One is also on the menu, which helps to make Front Porch a popular stop for a fresh bite on the go.

“Half of our customers really believe in what Kristen wants to do,” says her husband, Brenton. “The other half are couples who walk their kids to school. They’re coming by here five days a week and may not be thinking about the bakery, but they’re happy we are here.” Many folks who stop in are coming from other businesses in the area, such as the salon next door, or they’re the people who work nearby. As we were chatting, a stylist from the salon opened the front door to quickly ask, “What’s the soup today?”

The Costs of Local 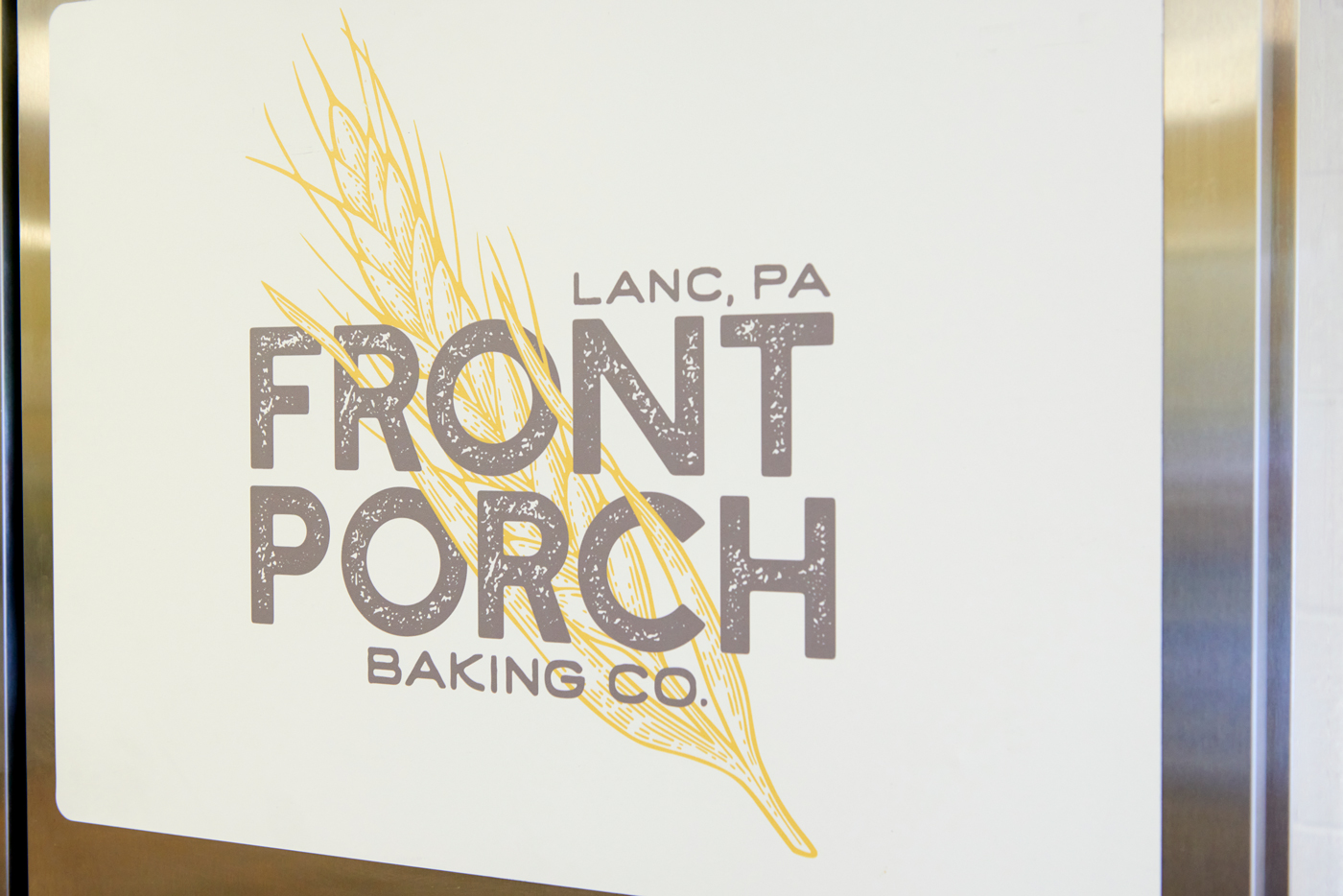 You’ve probably seen the PA Preferred label that denotes products are made entirely with Pennsylvania ingredients. For Kristen, valuing local comes at a price. “It does cost me more to buy local grain and local flour,” she notes. “I would love it if more farmers in Lancaster grew grains for human consumption.” While there are exceptions, much of the grain grown in Lancaster is produced for animal feed, especially silage corn. “I feel strongly that the money I’m spending on my business, that customers spend here, stays in local farms and businesses in Pennsylvania,” says Kristen.

On her website, Kristen defines her “dream to create a long-lasting connection from farmer to miller, to baker to consumer. I am committed to starting and continuing that conversation here as I expand my reach into the community of Lancaster.” Given how she sources her ingredients locally, the connections within the community are clear.

“We bake within seasons,” says Kristen. “Our handmade sourdough bread often highlights seasonal fruit or vegetables.” One of Kristen’s stops is Lancaster Central Market, where she purchases small quantities of in-season produce. Upon learning that local figs are baked into sourdough bread in late summer, I can’t help but smile. As we head towards summer, Front Porch plans to introduce “more laminated and naturally leavened” pastries into its mix of baked goods such as danishes and croissants.

If you ask any number of bakers how they use yeast, the answers will be remarkably varied. Larger wholesalers and massive producers of refined bread typically value instant yeast for the shelf-life, consistency and speed at which bread can be baked. Smaller, more artisanal bakers often opt to use as little as possible for a slower, hand-made approach. “We don’t use commercial yeast,” says Kristen, picking up a container of bubbly dough. “We use a sourdough-starter yeast.” Yeast is everywhere in the air we breathe and natural leavening allows that yeast to take over water and flour. Naturally leavened bread that utilizes an established starter takes at least three days and is what develops complex flavors and rich textures in artisanal bread. 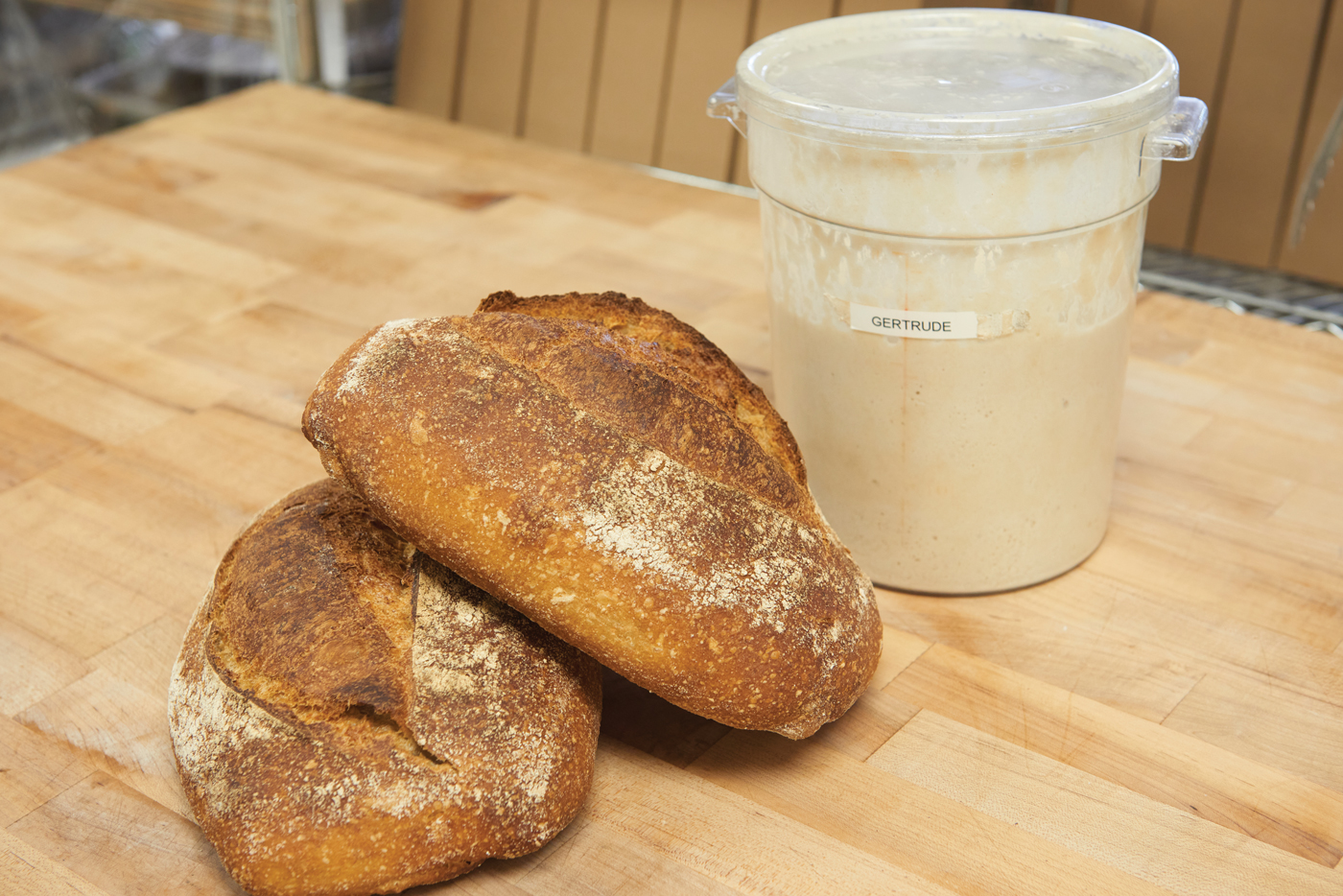 Anytime a sourdough starter is used to make a new batch of bread, only part of the starter is used. An equal amount of flour and water replenish the dough taken out, ensuring there’s enough to sustain the wild yeast. This natural yeast creates carbon dioxide gases in the dough, giving it that tangy, leavened, cavernous quality. As a nod to her family history, Kristen’s starter yeast is affectionately named after her Great Aunt Gertrude. Gertrude, or Gertie for short, is a living blend of flour, water and wild yeast that Kristen has kept active for approximately eight years.

Reclaiming a Quality of Life for Producers

Over the past two years, food producers and restaurants have taken steps to diversify sources of income, with a license to improve quality of life. Much like Community Supported Agriculture (CSA), subscription-based models empower small producers, growers and makers. “Prioritizing a work-life balance means we only have certain things,” says Kristen of the carefully crafted menu. It’s exciting to have a handful of amazing choices that change like a seasonal menu, rather than unchanging and mass-produced foods.

In addition to creating a rotating menu or schedule of baked goods, Front Porch also offers a CSA option. Front Porch Baking is now partnering with Fifth Month Farm (fifthmonthfarm.com) to offer its bread as an add-on for their new summer CSA fruit and vegetable share. The good news is Fifth Month will be offering more pick-up locations for subscribers throughout the area. For Kristen, participating in a CSA ensures less waste. As for subscribers, they are guaranteed to receive bread that’s made just for them.

In the history of the world, and particularly in the United States over the past few decades, bread and grains have been on a complex journey. In ancient Egypt, refined flour was considered the zenith of flours. Throughout American history, that perception was pushed to the extreme, with bleached-white flour producing quick, inexpensive and flavorless bread, before circling back to a resurgence of whole-grain bread.

“There’s no flavor or health benefits to bleached white flour,” Kristen says of the process that removes nutrients and then adds flour with other nutrients. “Enriched flour is more shelf-stable and there are fewer oils to turn it rancid,” she explains. However, it’s stripped of its original quality.

Baking connoisseurs have come to track varieties of grains, much like coffee aficionados seek out specific coffee beans or craft beer drinkers identify the flavors of particular hops. Similarly, learning the characteristics of each grain, such as where it’s grown and the climates in which it grows well, is becoming part of the process.

Different types of grain, as well as how they are milled and processed, are better suited for specific uses. Typically, in baking, specific flours are selected for either bread or pastries. Bread flour usually has 11-15% protein, creating a chewy, dense bread with more gluten or chains of protein. Pastries need flour on the other end of the spectrum, with less protein. All-purpose flour has 10% or less protein. Adding oil, fat and/or sugar creates layers of air in delicate, flaky crusts. “Gluten is a protein,” Kristen points out. “The more you mix it, the stronger the bonds become, and the less extensibility it exhibits. If it’s overworked and returns to its shape after stretching, it needs time to relax.”

Spelt flour is a somewhat unique option that can be used for both bread and pastries, as it has a protein level of 10-11%. Sourced at Small Valley Milling in Halifax, Dauphin County, spelt is one of Kristen’s choice flours and she uses it in her spelt streusel coffee cake recipe. Perfectly sweet, with a satisfyingly salty, savory undertone, her coffee cake is my favorite recipe I’ve tried thus far. It’s not too dry or dense but offers a crumbly texture so satisfying that I’m reluctant to share it. 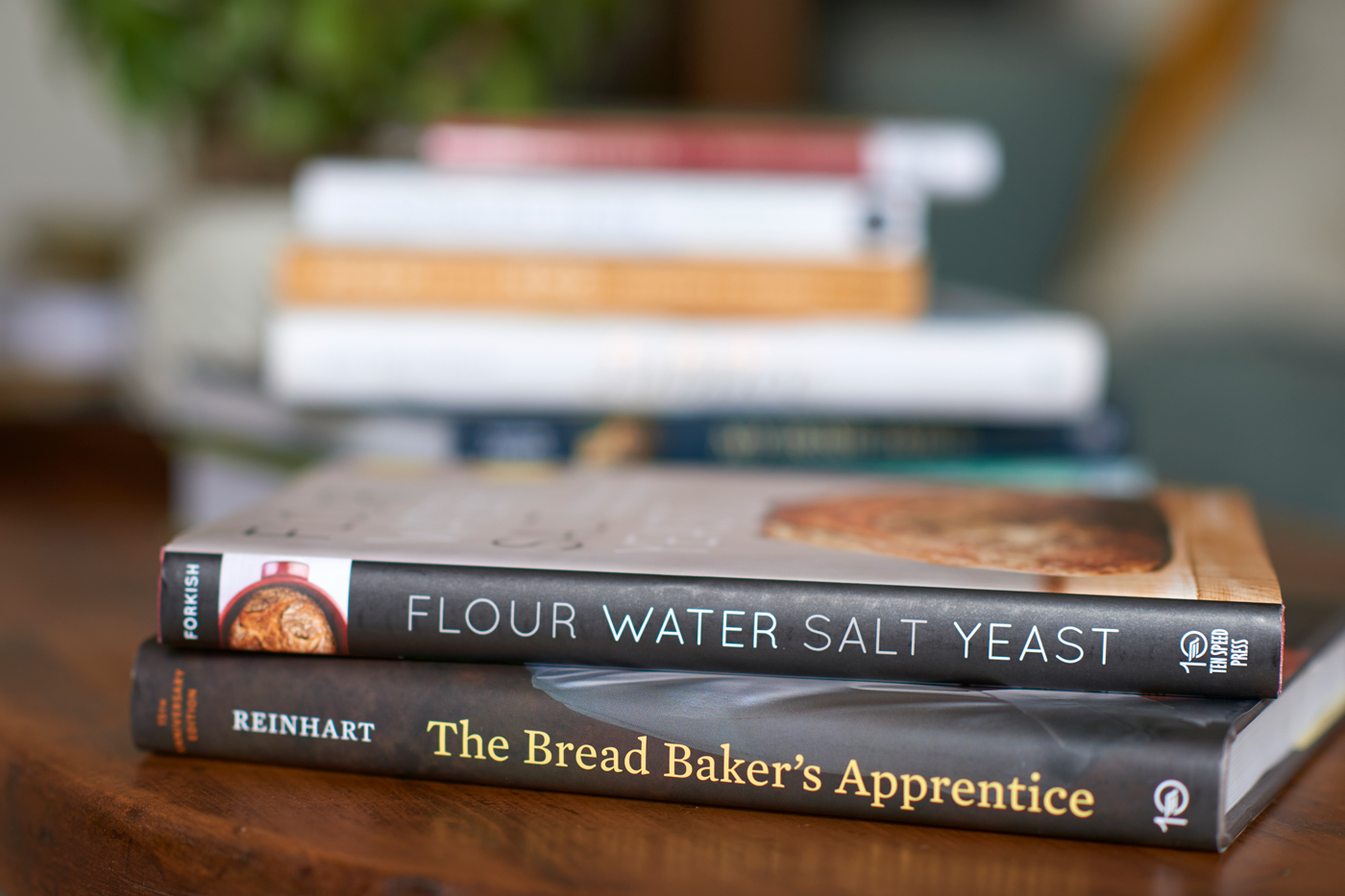 Bread: A Baker’s Book of Techniques and Recipes by Jeffrey Hamelman.

The Bread Baker’s Apprentice – Mastering the Art of Extraordinary Bread by Peter Reinhart.

The Tivoli Road Baker: Recipes and Notes from a Chef Who Chose Baking by Michael and Pippa James.