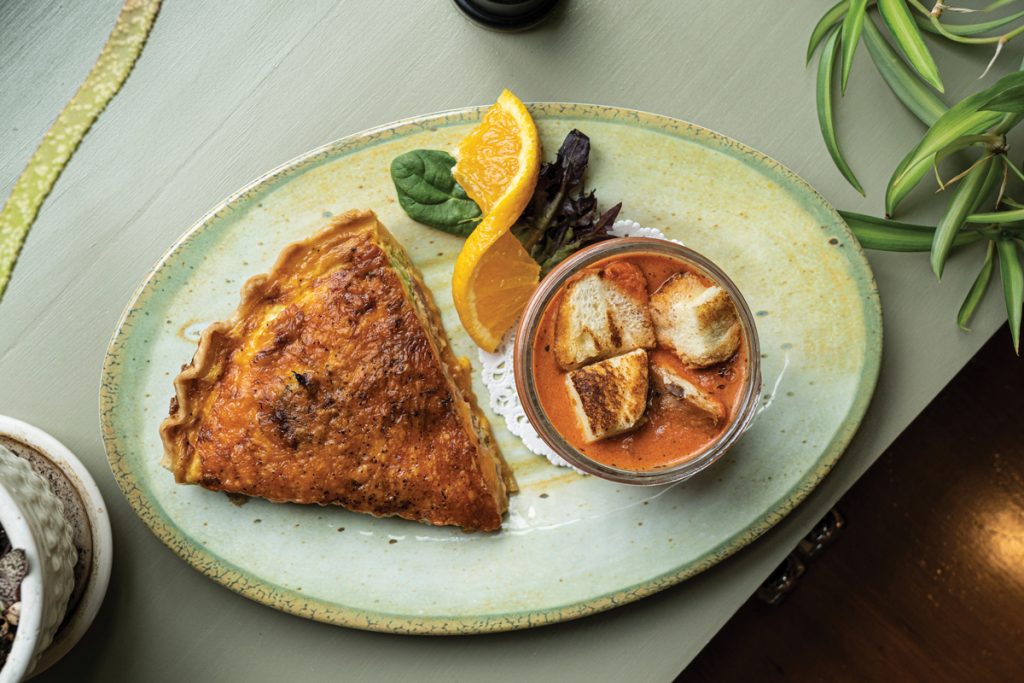 ArchiveCafeLCM Articles
Posted on November 19, 2019May 11, 2022 by Rochelle A. Shenk and Photography by Nick Gould in Archive · Cafe · LCM Articles

It was a five-year journey from the time Keith and Lisa Reinhart purchased the brick house at the corner of Village and Lampeter roads to the fall of 2017, when Lampeter Café opened for business.

“We had driven through the intersection for years and loved both the brick house [now Lampeter Café] and the stone house [that sits catty-corner to it]. I often thought the brick house would make a great café,” Lisa says. “When we saw that the property was for sale, we purchased it. It took some time before we opened, but I’m glad we had that time. Through the process, we changed our minds a few times, but we ended up with something great.”

The building, which dates to 1760, has seen its share of uses over the centuries. It’s served as a livery and a tavern. It was also a place of business for wainwrights and blacksmiths. An auto-repair shop once operated on the site.

Keith and Lisa are the owners of Fillmore Container, a supplier of glass jars, closures and accessories. Lisa ‘s background is biology, while Keith’s is business. “When I was in college in Philly, I found a lot of small coffee shops where you could have coffee and some space to study. I had worked in restaurants in high school and college, so when we talked about revitalizing the brick house, I thought about offering the fast, casual type of restaurant I had experienced in Philly. Plus, we had a friend, Freda, who makes terrific food and does catering. I thought we could offer her food,” Lisa explains. Dating to 1760, the brick building in Lampeter has served many purposes over the years. Lisa and Keith Reinhart’s efforts to renovate the property and transform it into a café and gathering place were recognized by the Historic Preservation Trust of Lancaster County in 2017.

When the couple began renovations, the brick house had been nearly gutted, but the summer kitchen and its walk-in fireplace remained, as did several other fireplaces. While a stone barn had been torn down, its footprint endured.

Working with Calabrese Good Architects, the couple expanded the original building with an addition that utilized the footprint of the barn. The addition houses a first-floor kitchen, while the second floor holds meeting space that’s known as The Upper Room (capacity is about 40). The summer kitchen provides a place for small groups (under a dozen) to meet. A brick terrace was also added; it connects the parking lot to the café and The Livery, an event venue that is designed to look like a stable and provides space for up to 70 guests. The café offers a wide range of menu items as well as an impressive array of coffee and other beverages.

“We wanted to make the café look and feel old but have it be manageable in terms of today’s technology, maintenance and cleaning. We took our design cues from the existing fireplace surrounds,” Lisa notes. “As a biology major, I’m pretty ecologically minded. So, we’ve repurposed a lot of materials,” she continues. For example, all of the tables in the café are made from flooring found in the original building. Stone for the exterior of the addition was repurposed from a barn. Walnut trees that were on an adjacent property that was purchased for parking were used to create tables in The Livery. Fir trees that were also on that property were used for paneling in that space.

The Reinharts’ efforts were recognized by the Historic Preservation Trust of Lancaster County, which presented them with a Community Revitalization Award in 2017. The café also hosts the Fun Art Club, which is under the direction of Creatives, by Michelle.

Lampeter Café seats 70 to 80, with outdoor space for 20 to 30. There’s no table service at the café – orders are placed at a counter. “We didn’t set out to be a restaurant; we set out to be a café,” Lisa notes. That means good coffee and comfort food made from scratch. A deed restriction prohibits the café from selling sandwiches, but Lisa says it’s not an issue. “It made us think outside the box and create our own things, and we knew Freda’s fantastic soups would be a hit,” she says.

Lampeter Café has become known for its quiches and Freda’s Famous Soups, both of which change regularly. Because flour is not used as a thickener, a majority of the soups are gluten-free. The selection also includes a good share of vegetarian choices. Local corn provides the makings for two popular soups, corn chowder and chicken corn soup. Grilled cheese croûtons are a signature addition to soups. Freda’s soups can also be purchased by the quart to-go.

The menu also includes “deconstructed” meals such as a Reuben on Rye that’s designed to be eaten with a fork. There are also wraps, salads and quesadillas, as well as entrées such as Mac & Cheese and the Mac Stack (mac & cheese topped with boneless wings), and a number of brisket-based dishes. Breakfast items are available until 11 a.m., but quiche is available all day. Popular breakfast items include Annie’s Hash – a breakfast casserole – and Pioneer Skillet (the café is in the Lampeter-Strasburg school district, and the pioneer is their mascot).

Desserts range from ice cream to crème brûlée. There is also a children’s menu.