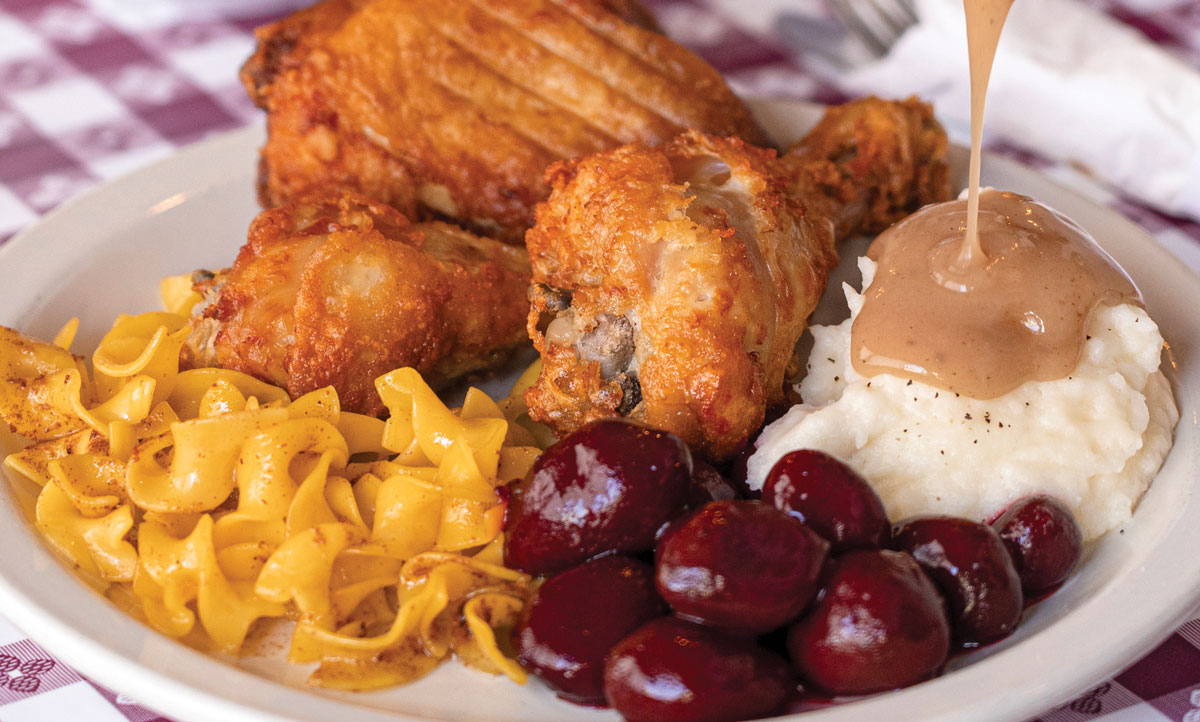 ArchiveLCM Articles
Posted on November 19, 2019June 15, 2021 by Rochelle A. Shenk and Photography by Nick Gould in Archive · LCM Articles

Good ’N Plenty and its owners, the Lapp family, have been providing a taste of the county’s bounty and hospitality to both local residents and out-of-town guests since 1969.

“We’re still family-owned,” says the restaurant’s current owner, Glen Lapp, who adds, “We now have the fourth generation of our family involved in the business.” While food is the main attraction, Glen maintains that hospitality has played an equally important role in the restaurant’s longevity. “We’re in the people business,” he notes. “We’ve served people from all over the world. And, as a multi-generational family business, we’ve also served generations of guests. We’ve had people tell us their parents and/or grandparents brought them here as children.” In the late ‘60s, Christ and Dolly Lapp had a simple goal: to provide friends and family with tasty Pennsylvania Dutch food. They achieved that goal by purchasing a farmhouse (circa 1871) along Route 896. When they opened their doors in 1969, the restaurant’s original seating capacity was about 114. Their timing and location were perfect – Lancaster County was fast becoming a popular tourist destination, and visitors were anxious to sample everything from red beet eggs to shoo-fly pie.

Two years after opening, Good ’N Plenty expanded with the addition of the Dutch Room. The reception room was expanded in 1978, and the Harvest Room was added in 1995 to accommodate small groups and business meetings. Today, seating capacity is over 500. The Lapps also own and operate Bird-In-Hand Farmer’s Market, which opened in 1976.

Because of their contributions to Lancaster’s tourism industry, Christ and Dolly were presented with the Pennsylvania Dutch Convention and Visitors Bureau’s (now Discover Lancaster) Spirit of Hospitality Lifetime Achievement Award in 2014.

Pennsylvania Dutch cooking and family-style service are the hallmarks of the restaurant. Food is prepared fresh daily using as many locally sourced ingredients as possible. For example, locally grown cabbage is used to make pepper cabbage, while locally grown corn comprises vegetable dishes and is used to make chicken corn soup. Rolls, breads, baked goods and desserts such as ice cream are made fresh daily in the on-site bakery. “Our guests are interested in a farm-to-table experience. Visitors to the area see what we grow here, and they get to taste it at our restaurant,” Glen explains. Glen Lapp readies the bakery for a busy day.

Glen notes that Good ’N Plenty’s menu has stayed consistent since the restaurant opened. However, in order to meet lifestyle demands from a dietary perspective, dining options have expanded. While all-you-can-eat family-style dining is still the most popular option, Good ’N Plenty added menu dining in 2009. There are separate dining rooms for each type of dining. “Some people like a more traditional restaurant experience. We also realize that it’s a way to attract both local residents as well as visitors to our area. And, although we’ve had menu dining for 10 years, a lot of people still don’t know about it,” he adds.

As for menu-style dining, options include the homemade items that the restaurant is known for such as baked chicken pie, baked meatloaf, fried chicken and the PA Dutch sampler. Entrées are served with two sides and a dessert. Soups, salads and sandwiches are also offered. Daily specials are available, as well. When Christ and Dolly Lapp opened Good ‘N Plenty in 1969, it was located in the farmhouse that originally seated slightly more than 100 guests. Thanks to expansion, the restaurant can now accommodate more than 500 guests.

Of course, local residents are important to the business, especially during the winter months when tourists head for warmer climes. Glen notes that local residents often have a misconception that with a seating capacity of 550, the restaurant is always packed. “That’s often the case, but there are slow times depending on the season and the day; most weeknights there’s not a long wait. Everyone is welcome here – we’re not just for visitors to our area,” he explains.

As a way to nurture a local customer base of “regulars,” Good ’N Plenty 2Go was launched in 2010. “We know that people are busy, so we want to make it easy for families to have a homemade meal. Everything we make is available to-go, and call-ahead is encouraged,” Glen says. “Our to-go option has proven to be really popular, particularly with local residents.” Banquets and private parties can also be accommodated.

After dining or while waiting to be seated, guests may browse in the extensive gift shop, check out the 3-D Zook paintings of local scenes, or stroll through the bakery with its tempting selections that include whoopie pies, cookies, sticky buns, breads, fruit pies and, of course, shoo-fly pie. Special-occasion cakes and holiday treats can be ordered as well. There’s also a playground and petting zoo for the kids.

Good ’N Plenty is located at 150 Eastbrook Road (Route 896) in Smoketown. Hours are Monday-Saturday, 11:30 a.m.-7 p.m. The restaurant is closed Sundays except Easter and Mother’s Day. Good ’N Plenty will be open for Thanksgiving by reservation only. Call 717-394-7111 or visit goodnplenty.com.