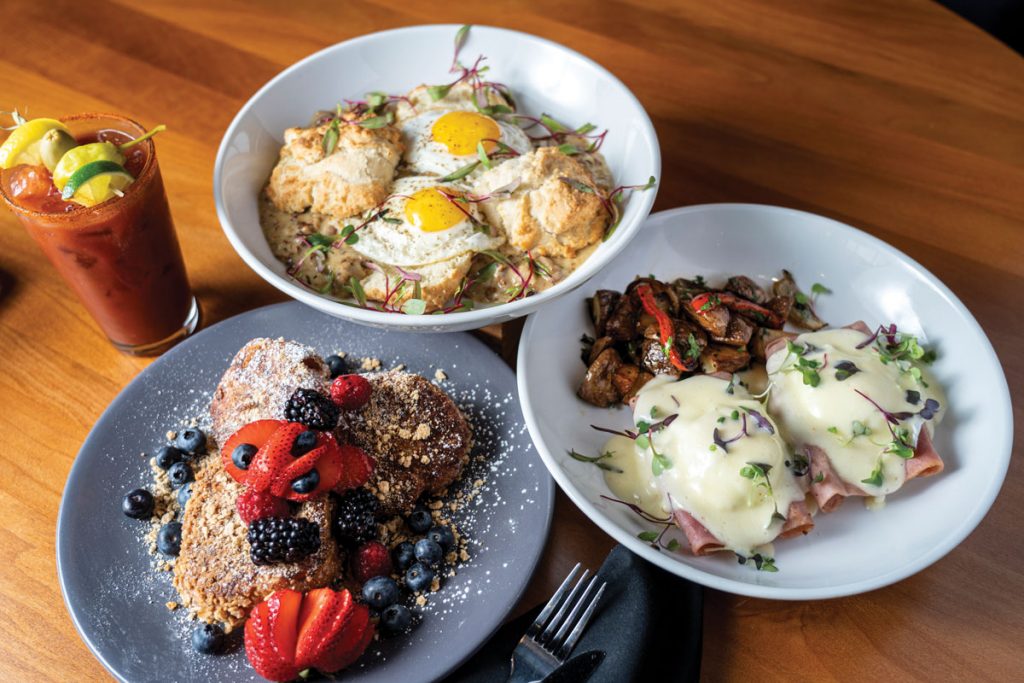 The Imperial is celebrating its first anniversary this month. Located on the ground floor of the Holiday Inn at the corner of North Queen and East Chestnut streets, The Imperial takes its name from a hotel that operated on the site in the 1800s. While The Imperial’s name pays homage to Lancaster’s past, the décor – credit goes to Noelle Turco of Red House Design Company – is definitely modern-day.

The Imperial finds itself in the midst of revitalization projects that are transforming the 100 block of North Queen Street into a mix of office, retail and living spaces. Actually, it’s part of a revitalization story of its own – the property’s owners, John Meeder and Sam Wilsker, spent five years renovating and upgrading the hotel that is now a Holiday Inn. The final piece of the puzzle was creating a destination restaurant for guests and locals alike. The goal in creating such a restaurant was to capture Lancaster’s modern side yet pay homage to its storied past. “We fit in with the feel of Lancaster,” says General Manager David Gannett of The Imperial’s eclectic look and feel. He credits Meeder and Wilsker for deviating from a formula hotel restaurant and making it a Lancaster brand. The wide-ranging cocktail menu pairs perfectly with the items that comprise the breakfast, brunch, lunch, dinner and bar menus.

Creating the look and mood of the restaurant fell to interior designer Noelle Turco of Red House Design Company. She was ultimately inspired by the restaurant’s name and history. (President Lincoln once delivered an address from one of the original hotel’s balconies.) “When I design projects, I like themes. Here, the restaurant tells a story – when you walk in, the lights around the bar are reminiscent of a railroad station,” she says of the fact that during the 1800s, Lancaster’s train station was located in the vicinity of the hotel. “There’s also a mid-century-modern look,” she continues. “We’ve incorporated plants, a fountain and rich colors to create a feast for the eyes. I found historic photos of the area or historic events like presidential visits and hand-colored them to add pops of color.” A modern-industrial look was added to the mix courtesy of the exposed ductwork that’s painted black and blends into the ceiling. Another nod to modern design is found is the large windows and doors that open onto patios on both the Queen Street and Chestnut Street sides of the restaurant and admit plenty of natural light. For those wanting to take in Lancaster’s holiday decorations, Gannett says the patios will be equipped with heaters and remain open into early December (depending upon the weather). The Imperial seats about 160, including the dining room, bar, both patios and two meeting rooms that can be used for overflow seating. The dining area features seating at tables and banquettes. The artful décor includes a curved seating area and a view into the kitchen. There’s also a breakfast room that serves a breakfast buffet for both hotel guests and downtowners. The brunch menu features such dishes as biscuits and gravy, eggs benedict and oats and wheat pancakes served with assorted fruit.

Two meeting rooms – the Chestnut and the Queen – seat 75 and 24 people respectively. “Both rooms are great spaces for business meetings or private parties like bridal or baby showers or birthday/anniversary celebrations,” Gannett says. Larger social events or business meetings can be accommodated in the Imperial Grande and Imperial Blue ballrooms on the hotel’s second level.

In view of the fact that the restaurant is located in a hotel, food service includes breakfast, weekend brunch, lunch and dinner. The bar also has a small menu. The kitchen is headed by Chef Brian McNulty, whose love of seafood grew out of boating and fishing the waters off Long Island, where he grew up and launched his culinary career. His resumé includes the Hyatt Times Square (executive sous chef) and the Oceana (sous chef), both of which are located in New York City. “I want The Imperial to be a place where people come for great seafood,” he says. “Lancaster has a wide variety of restaurants, but it was lacking a great seafood place.” Peruse the menus, and you’ll see evidence of McNulty’s focus on seafood as it includes Mediterranean sea bass (also known as branzino), halibut, pan-seared scallops, salmon, shrimp and grits, calamari, mussels and more. The dinner menu also features steaks, chops and poultry dishes. In addition to seafood, the dinner menu features a selection of beef, pork and chicken entrées.

The Imperial’s menus also take culinary lifestyles into consideration and offer gluten-free, vegan, vegetarian and plant-based dishes. McNulty says one of the most popular items is General Tsao Tofu, which is served with black forbidden rice.

Other customer favorites include the triple-decker club and meatloaf sandwiches; Imperial stuffed meatloaf with mac and cheese and beef tenderloin tips on toast. Sandwiches are part of a $10.95 lunch menu. The lunch menu also includes a soup and sandwich special and several pizza and pasta items as well as seasonal soups, salads and plant-based specialties. “We know people don’t have a lot of time at lunch, so we make sure that they can get in and out in about 45 minutes. Our servers and kitchen staff are committed to that,” McNulty says. The lunch menu features a variety of sandwiches, including pulled pork served with herb-dusted fries. In addition to the restaurant menus, Gannett says The Imperial’s bar, which is managed by Patrick McGettigan, whose resumé includes Character’s Pub and Carr’s Restaurant, has its own bar menu and special events such as Monday Night Trivia and Whiskey Wednesdays. “There’s always something happening here,” he says.