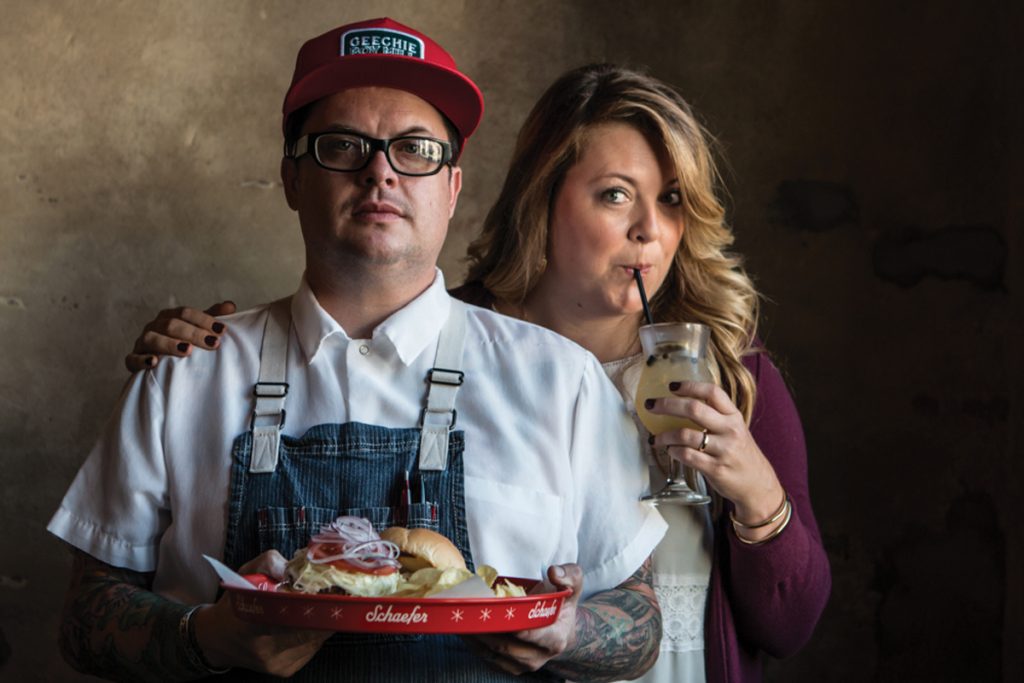 Originally featured in the February 2018 issue of Lancaster County magazine.

The Horse Inn is considered by many to be one of Lancaster’s iconic restaurants. Some may find it a bit daunting to live up to that reputation, but owners Starla and Matt Russell have not only maintained its character and flair, but they’ve also put their own stamp on the building, décor and menu.

The building that houses the Horse Inn was originally the carriage house to a home on East Chestnut Street. In the early 1920s, the Shaub family transformed the second-floor hayloft into a speakeasy. The original horse stalls were moved upstairs to create ambiance for those who gathered to enjoy the spirits and the food that accompanied them. After Prohibition ended, the tradition of serving food and spirits continued under a series of owners. It’s carried the name Horse Inn since 1935. The Russells purchased the restaurant in January 2014 and opened it five months later after making some renovations. The famed horse stalls, which create intimate dining areas along the wall, remain in place. The bar stools, which are repurposed wagon wheel hubs, still have their special place in front of the bar in the dining area. Matt explains the bar itself was created from the original doors of a building at Franklin & Marshall College. Another historic note – the tables and chairs, which have been at the restaurant for a number of years, were originally used at the Toby Tavern, a long defunct bar/restaurant that was located at the corner of Prince and King streets; the spot is now occupied by the Stevens House condominiums.
The Russells also incorporated some updates. For example, the entrance off Fulton Street replaced the prior entrance that was situated off an unnamed alley, making it a bit tricky to find. And, the canopy that had hung over the bar was removed to allow a better view of the beautifully crafted back bar.
What had been an overflow dining area now serves as a waiting area and game room, with its own bar. Although it’s new, the bar maintains the restaurant’s period character. “We’ve added a bit of history in this room,” Starla points out. The bar is made from floor joists that were in the Martic Forge Hotel. “We also have a shuffleboard table there – until 1947, the restaurant had a shuffleboard table.”

A Lancaster County native, Matt is a graduate of Johnson & Wales in Rhode Island. After graduation, he spent 16 years working in restaurants in one of the South’s favorite foodie destinations, Charleston, South Carolina, which is where he and Starla, who is also a Johnson & Wales graduate, met. She had a restaurant management background, and her roots are in the Charleston area. The couple wanted to open their own restaurant there, but she says they had second thoughts because “it’s too saturated with restaurants.” “The first question everyone asks about the menu is, ‘Do you still have tips & toast?’ It wouldn’t be the Horse Inn without tips & toast – so, yes, it’s on the menu, but there’s so much more,” Starla says with a smile.
The menu changes seasonally, and there are daily updates to accommodate the availability of fresh, local produce and other ingredients. Surprisingly, Matt names the Horse Inn’s cheeseburger as the most popular menu item (even outselling tips & toast). Other top sellers include Music City’s “hot” chicken sandwich and the Horse fries. The eclectic menu also features tacos, buttermilk chicken and, in a nod to the South, shrimp and grits.
To accompany the menu items, there’s a wide selection of beer and specialty cocktails. Matt says there’s everything from a $2 mystery beer to a $15 specialty cocktail. Local brews include St. Boniface, Troegs and Victory. Wine is available by the glass or bottle. “Our focus is classic cocktails done correctly. We make our own bitters and syrups, and we use fresh-squeezed juices. Plus, our staff is well trained to discuss the beverage menu, and all cocktails are measured, so they’re consistent,” he stresses.
The Russells are proud of the fact that the Horse Inn continues to be one of Lancaster’s favorite dining destinations. “Food brings people together,” Starla remarks. “We like to think that people can come here and enjoy the food, atmosphere, great service and talking with one another.”

The Horse Inn, 540 East Fulton Street, Lancaster.
Hours are 5 p.m.- midnight, Tuesday through Thursday; 5 p.m.-1 a.m., Friday and Saturday. Closed Sunday and Monday.
Live jazz is offered Tuesday and Saturday evenings. Reservations are not accepted. Parking is available at a lot on the corner of Fulton and Marshall streets. For more information, call 717-392-5528 or visit horseinnlancaster.com and Facebook.