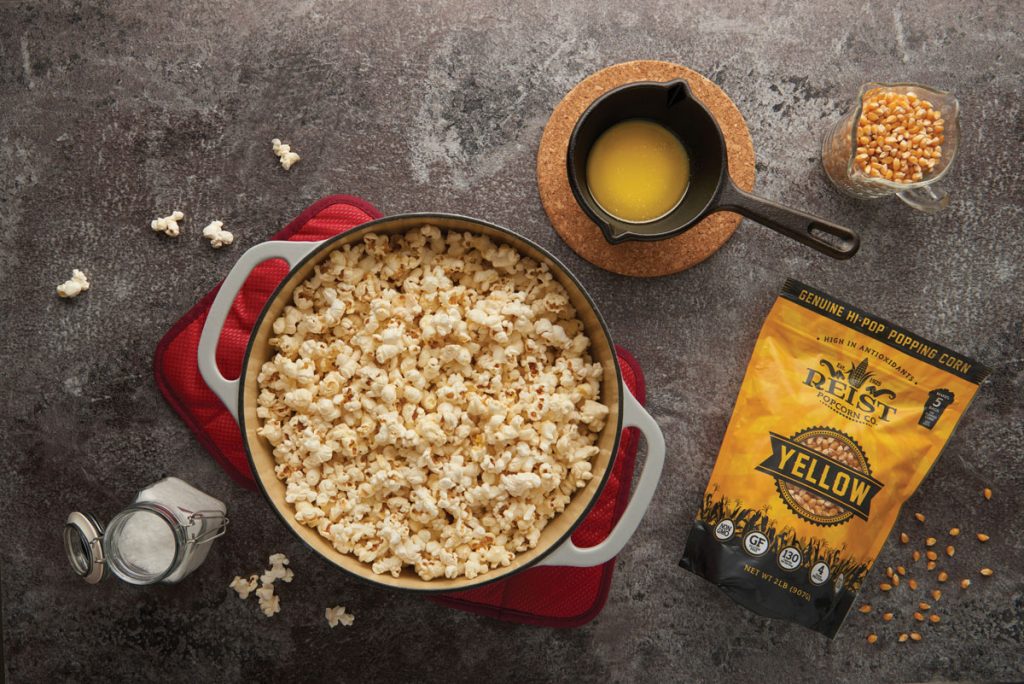 Originally published in the October 2020 issue of LCM

Despite the fact that movie theaters were closed for six months, the sale of popcorn in the U.S. is projected to reach $12 billion this year. The eye-popping number is being driven by the sale of ready-to-eat varieties that now dominate the snack shelves of grocery and specialty stores. But, thanks to a local company, Reist Popcorn in Mount Joy – you can pop it the old-fashioned way and create your own taste
sensations.

In this age of healthy eating, popcorn is viewed as the perfect snack. It’s low in calories, delivers flavors beyond butter – sea salt, rosemary & olive oil, cheddar, rosé wine, caramel and the list goes on – and solves those salty cravings we all get. It’s become the fun snack for everything from parties, showers and weddings to vegging in front of the television.

It feels like years have passed since I last visited a movie theater. Actually, it was opening night of Star Wars: The Rise of Skywalker at Penn Cinema, in the days before Christmas 2019. As is my usual routine, I picked up a sweet, ice-cold Cherry Coke and a salted-and-buttered bag of popcorn before settling into the reclining seat.
Amidst the COVID-19 pandemic, theaters were forced to close. Drive-in theaters made a welcomed comeback, including at Penn Cinema.

While still incomparable, the home movie experience continues to evolve. With online-streaming services producing feature-quality films, such as Tom Hanks’ superb Greyhound on AppleTV+, movie nights are taking on a new form. When the Broadway performance of Hamilton debuted on Disney+ in July, friends in Connecticut simultaneously pressed play to join in from afar. We even silenced our phones during the first and second acts, took a shared intermission to refill drinks, and discussed the performance after. Despite missing the completely enveloping visuals and ground-shaking audio of the theater, the most glaring difference is the lack of concessions – specifically, popcorn.

Yes, there are plenty of options available. Microwavable popcorn is hit or miss and the differences are carefully marketed. Act II and the higher-quality Orville Redenbacher brands are both owned by Conagra Brands, which also owns Angie’s Boom Chicka Pop. Those are all fine, but I’m left still wanting the real thing.

With kitchen space in our home at a premium, I tend to be gadget-averse, which rules out a popcorn machine. So, the cast-iron Dutch oven that already lives on the stovetop is a perfect solution. The lid retains heat and restrains popped corn so it doesn’t end up all over the kitchen.

Wanting more, I decided kernels were next on my list. With so much dent corn (field corn) grown in Lancaster County for grain and silage, surely some of it must be popcorn?

As it turns out, popcorn is commercially grown in Lancaster County. Of the county’s 393,949 acres of farmland, a mere 34 acres grows popcorn commercially. All 34 of those acres are located in Mount Joy at the Reist Farm, which has been in their family since 1827. They’re the owners of Reist Popcorn Company, which was founded in 1925 by Alvin Reist, and remains the easternmost popcorn processor in the United States. If you’ve enjoyed a bag of popcorn at a sporting event or on the boardwalk, you’ve almost certainly had Reist Popcorn.

“Popcorn growing is unique because it requires a few more steps than traditional dent corn varieties,” says Reist Popcorn Company’s president, Mike Higgins. After years of succession planning, Mike is the fourth-generation in the Reist family to take over, having been handed an actual baton in 2019 from his father-in-law, David Reist. Mike emphasizes his stance on the shoulders of those who came before him and those he works alongside every day.

He says popcorn is considered a specialty corn, requiring the most sophisticated farmers. It costs less to grow in Midwestern states, across vast swaths of land, which itself requires less capital per acre. Buying from growers across multiple states, many of whom Reist has partnered with for decades, insulates them from poor harvests geographically while curbing market volatility. Looking at the total U.S. corn production, popcorn accounts for 240,000 acres, yet again far less than the 80,000,000 acres of dent corn.

According to Mike, “The growing season – May through October – is the same in the U.S. for other corns. It’s not a genetically modified crop, thus farmers can’t spray herbicides directly on the plants. Growers that can learn popcorn within three years don’t ever look back to dent corn,” which offers “less handling and more dollars per ton.”

A Century of Growing

Mike will tell you Reist Popcorn Company has seen tremendous growth and change in the last decade, expanding the company’s business into transloading and international popcorn sales and purchases. The instant flow of information within the popcorn industry to all hands in the supply chain makes for faster decisions, so the market responds quickly. Reist’s core business is unchanged but it has diversified by leveraging assets to offer additional services to their customers. Utilizing transportation equipment that typically hauls popcorn, Reist can also offer dry-bulk transportation for customers. They can offer storage, cleaning and remediating of other companies’ products, including changing transportation modes. “Our rail siding allows us to grow popcorn in any state and transport it to Pennsylvania at a competitive rate,” says Mike of their separate transloading facility on Square Street in Mount Joy.

Reist’s employee culture is also geared for innovation, similar to industrious farmers who often adapt out of necessity. Mike looks to utilize the comprehensive skill sets of each staff member. Rather than simply placing people into defined roles, he looks to work with an individual’s experiences and strengths wherever it makes sense, which makes for a rewarding workplace. Remarkably, Reist’s employees performed most of the construction during their recent addition, bringing in only a few contractors. Old exterior brick is being repointed and one employee, a former mason, is leading the charge. Adapting to the COVID-19 Pandemic

Like other businesses, the pandemic is having an effect on how Reist does business. “We purchase and ship popcorn all over the U.S. and to other parts of the world. We are having a lot of supply-chain issues with shipping and receiving popcorn from abroad. Other countries’ ports went on lockdown or partial hours to accommodate and implement safety measures for their employees,” Mike explains. “Some of our concession and service-industry customers are going bankrupt. In the coming months, we could see more business closures, [movie] theater closures and supply-chain issues in the industry. We are being cautious and conservative with our inventory purchases and sales projections. Our goal has always been to under-promise and over-deliver. We hope things settle down and people feel comfortable going back to the theaters and theme parks. Our business has been very fortunate to survive the pandemic. We are very thankful to all our customers, vendors and farmers for helping to work through this difficult time.”

While adding retail to the business is at the top of Reist’s list of goals, Mike says it’s complicated. Local grocers often look to larger distributors for their products and shelf space is highly competitive. The retail market requires different key relationships than those in the bulk world, distinctive distribution channels and packaging. Movie theaters can also be a tough market to supply, especially theater chains. They tend to want to source all of their concessions, from popcorn kernels to candy, from one supplier for convenience, simplicity and value.

Retail could be lucrative for Reist. According to Mordor Intelligence, the sale of popcorn (retail) has risen more than 32% over the last eight years, much of it driven by the popularity of ready-to-eat varieties. Globally, the popularity of popcorn is expected to increase 13% annually through 2023.

Having secured the kernel of choice, over medium heat, add a couple of test kernels to three or four tablespoons of oil of your choosing. Canola oil will do; I prefer bacon fat, though it has a lower smoke point. Once these two kernels pop, remove them from the Dutch oven to carefully add 1 cup of kernels. Cover, resisting the urge to peek, and carefully agitate or shake as necessary. Remove the Dutch oven from heat once the popping slows down and transfer the popped corn into a large serving bowl to prevent burning.