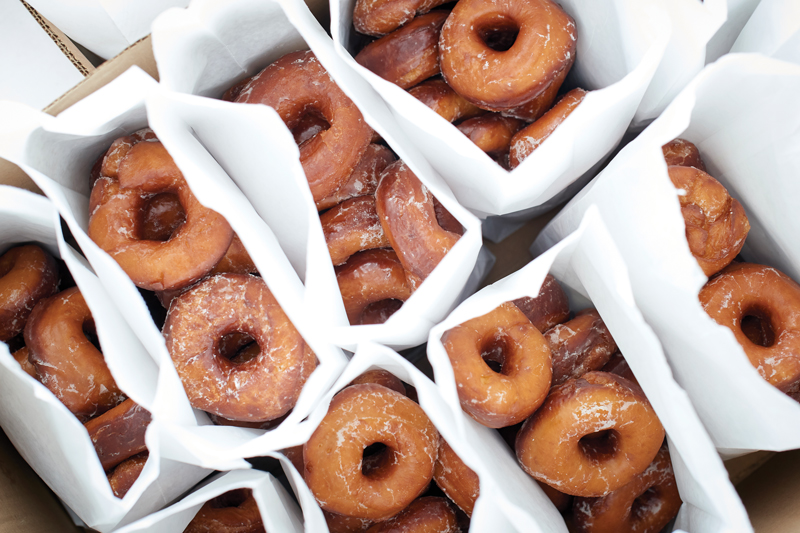 Holy Trinity Catholic Church in Columbia has been making fasnachts for 95 years. One taste, and I think you’ll agree their glazed version is the best you’ve ever had. On a whim, I decided to add a Southern spin to these Pennsylvania Dutch treats that signal the beginning of the Lenten season.

Ed Wickenheiser is the first to arrive at Holy Trinity during Lent. It’s his job to unlock the door, so he arrives early – as in 3:30 a.m. On his way, Ed graciously picks up a few volunteers. “I have my route; that’s why I get up extra early,” he says.

I hit the road to meet them. A layer of frost has formed on the roof of my car, and the crisp, winter air has a hint of a chimney fire. Not much is happening on the radio at this hour; the morning talk shows won’t start for another hour or two.

Not being much for early mornings myself, it astounds me to see so many volunteers eager to start baking at such an unholy hour. It makes a bit more sense when the fasnachts start coming out of the fryer and a wave of sweet aromas awakens your senses. It makes even more sense once you get to know the people who volunteer. There are a number of core groups involved in the production of fasnachts, and they run a tight ship. The mixing crew, also known as the “A-Team,” has prepared the mix the night before. The dough is placed in 57 buckets – referred to as “cans” – each of which typically yields 11 or 12 dozen fasnachts by volume. They are then set in a warming cabinet to rise overnight.

In the morning, the “Holy Rollers” take over. The rollers are supported by a team that hands out small portions of dough for rolling and collects boards filled with cut fasnachts that are ready to proof in yet another warming cabinet before frying. Navy veteran Jim Knapp helms the frying room (“Holy Friars”), which also includes the glazing team (“Holy Dunkers”). As with everyone I met, Jim is as welcoming and kind as he is dedicated to the craft and community he serves. Hot out of the fryer, two-thirds of the fasnachts are dunked in a sweet glaze before cooling, with the other third left plain.

The packaging team bundles them up by the dozen for the sales team to distribute to fasnacht fans. Lest I forget, there’s the cleanup crew, which sifts the unused flour, sweeps the floor and cleans tables, cutting boards, cans and utensils. Last year, there were 11 baking days in February and March and if you do the math, that yields approximately 7,500 dozen fasnachts that sell out even before the baking starts.

While the statistics associated with Holy Trinity’s operation are remarkable, they pale in comparison to the sense of community these folks share. Despite being rather preoccupied, everyone is bursting to share their story, and I apologize in advance for running out of page space to include the sampling of folks I was privileged to spend a couple of days with. Among the first I spoke with, Bernadette Horn recalls she has only “missed once, 13 years ago yesterday, when my granddaughter was born.” Rolling next to Bernadette is Patsy McBride, who remembers paying a nickel for a fasnacht as a student and carrying eggs to school for the bakes. She explains that almost everyone here is related, then points out her cousin, Kathleen Lutz, who has been coming for 42 years. “When I started, this building wasn’t even built,” says Kathleen. Her mother-in- law, Cora Lutz, affectionately known as “Tut,” (rhymes with “put”) turns 91 this year and wears an apron commemorating the founding of Holy Trinity’s bake in 1924, remarkably just four years prior to her birth. Her daughter, Karen Lutz, rolls dough next to Kathleen, while her other daughter Thomasine, and brother-in-law John, also participate in the bake. In trying to keep up with the family tree, and forgive me if I missed anyone, I’m told Cora’s great-granddaughter comes to help on occasion. “One of the benefits of working here is you’re guaranteed [to gain] 5 pounds,” says Anna Colin. She is working next to Linda Colin (their husbands are cousins). Linda will tell you, “If you’re a Columbia person, everybody helps each other.” Linda jokes that when she worked as a meter maid, she once gave a parking ticket to Kathleen, who happens to be the wife of Columbia’s mayor, Leo Lutz. The story prompted the whole group to roar with laughter as they joyfully reminisced about their community and connections to one another. One cannot help but covet the wonderful sense of community this group has fostered over the years.

If you’re willing to start your mornings at 3:30 to roll fasnacht dough, it’s almost a certainty you’ll be welcomed with open arms. The fasnacht bake serves as an excuse to spend time with friends and fellow parishioners. For some, it’s the only time they see each other from year to year. The experience is passed down from one generation to the next, and what once started as a women’s group fundraiser for the church has grown into a community event filled with pride. If that’s not reason enough to admire these folks, how they handled a glitch in the online ordering system a couple of years back says it all. Each volunteer has the option to purchase two dozen fasnachts per bake, and having oversold 140 dozen in a process that rivals ticket sales to see Bruce Springsteen in concert, they sacrificed their own bounty to fill customers’ orders.

Fasnachts became a staple of Lancaster, York and Lebanon counties with the arrival of Swiss-German immigrants in the 1700s. It was customary for the Swiss-Germans to use up the fat, sugar, etc. (think carbs) that were left in their pantries by making fasnachts on Shrove (or Fat) Tuesday, thus removing the temptation to indulge in the treats they vowed to “give up” during the Lenten season. As for the ingredients, fasnachts have been largely unchanged with a few exceptions. Where a donut would be categorized as a cake on the food pyramid, fasnachts, however, are made with yeast, similar to the New Orleans beignet. Many moons ago, leftover water from boiling potatoes was recycled to add starch for the yeast to activate. (In some areas, fasnachts are made from mashed potatoes.)
Back then, students who attended Holy Trinity’s parochial school would each bring an egg, which could be a real challenge for families approaching a dozen children in size, and fasnachts were cooked in lard. In 2018, the FDA ruled nationally that partially hydrogenated oil has no known health benefits, so last year’s batch was made with vegetable oil free of saturated fat. They were just as tasty, and, if you ask me, it appears to provide an excuse to eat more fasnachts. I didn’t ask for any trade secrets, and Jim revealed he doesn’t know what goes into making the glaze, but I did pick up a few pointers along the way. The dough should never be floured on top, as the added weight will prevent it from rising. If the yeast in the dough cools off, the mix will cease to rise, so keep the room temperature warm. Rolling pins and the cutter are floured before every single use to keep dough from sticking. Eggs, sugar, flour and yeast are among the main ingredients, as is evidenced by the pallets of flour and sugar lining the room.

I’ve heard folks accuse the fasnacht of being boring, but something so satisfying and time-honored is not to be messed with. I’ve got to admit, Holy Trinity’s glazed fasnachts are the best I’ve had to date. Still, I couldn’t resist experimenting with them – I decided to add a Southern spin, and what better place to start than with butter, chicken and bacon?

Start by mixing flour, ground pepper, salt, garlic powder and cayenne pepper in a bowl or casserole dish. Dip boneless chicken thighs in the mix, then dip them in a separate bowl of buttermilk before breading a second time. Deep fry the chicken for 10-15 minutes in cooking oil at 325 degrees F. Next, cook two slices of Kunzler’s thick-cut bacon (for each sandwich). I can already hear your New Year’s resolution objections, but now is not the time to refrain. After all, Shrove Tuesday (March 5 this year) is a day to indulge. We’ve come this far, and the end is near (literally and figuratively after all of these calories)!

Slicing a fasnacht in half, butter and warm it in a cast-iron skillet. Place the chicken and bacon atop one of the halves. A drizzling of grade A, medium amber, Vermont maple syrup completes the most sweet-and-savory Lenten sandwich you can imagine. Alternatively, you could use King Golden Syrup, local honey or mascarpone cream cheese with herbs. Either way, you will surely need 40 days of fasting to atone for this ridiculously rich transgression that is sinfully delicious. While whoopie pies beg to be accompanied by milk, fasnachts pair beautifully with coffee. One to try is the Fasnacht House Blend from Lancaster County Coffee Roasters. This mild and mellow blend is the company’s spin on donut shop-style coffee.

Where to Get Fasnachts on March 5

Holy Trinity in Columbia: Walk-in sales are not offered. All fasnachts must be pre-ordered online. Fear not: Holy Trinity’s fasnachts are available beyond Fasnacht Day; in fact, they are sold throughout the Lenten season. Visit the church’s website at holytrinitycolumbiapa.com to place your order.

Oregon Dairy: The market will be offering drive-thru service under its carport from 6 a.m-9 p.m. Choose from plain, powdered or glazed. 2900 Oregon Pike. Oregondairy.com.

To Market: Fasnacht Day is a big event at Central Market and Root’s Country Market. Bakeries at each location will be offering their versions of this Pennsylvania Dutch treat.

Head for the Grocery Store: Stauffers, Giant, Weis, Yoder’s, Shady Maple, Ferguson & Hassler, Musser’s and other local stores will be able to supply you with fasnachts. It will be interesting to see what the new guys in town do. Will they come up with an organic, gluten-free, keto-friendly fasnacht?