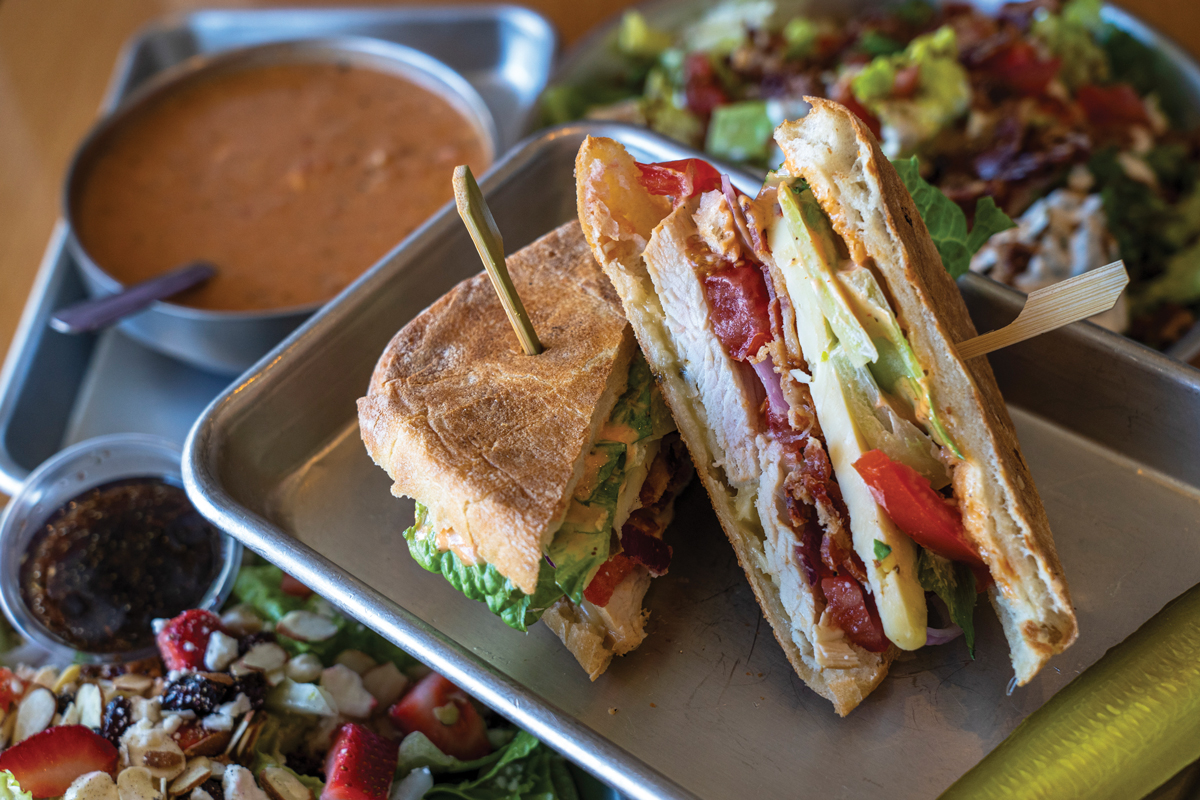 ArchiveCafeLCM Articles
Posted on August 21, 2019June 15, 2021 by Rochelle A. Shenk and Photography by Nick Gould in Archive · Cafe · LCM Articles

Scratch Bakes has a prime location in downtown Ephrata that is not only convenient for those who may want to grab a coffee (or latte) and a muffin to go, but it’s also become the place to meet a business acquaintance for breakfast or lunch or a friend for a light pre-theater or movie dinner.

Who knows, you may even see a celebrity – in January 2018, Martha Stewart popped in unannounced to grab lunch as she made her way to the QVC studios in West Chester. “I wasn’t there at the time,” recalls Scratch Bakes’ owner, Laura Will. “I’m sorry I missed her. I couldn’t believe she stopped at my place. I was raised on Martha Stewart; my mom is a huge fan.” While it was flattering enough to have Martha stop by the shop, Laura was amazed to discover that she posted pictures of the goodies she purchased to her social media sites. No doubt, Martha, who launched a catering business out of her basement, could relate to Laura’s career path. Scratch Bakes took root in Laura’s home. Using her mother’s Kitchen Aid mixer and a regular home oven, she began making cupcakes. “I’ve always worked in the restaurant industry. I don’t have formal training in pastry arts – I’m self-taught,” she explains. “I started out with a job as a cake decorator. Then, I decided to open my own business making cupcakes. Luckily, that was at the time of the cupcake boom.” While luck was part of the equation, fresh ingredients and “love baked into every bite” played key roles in Laura’s successful venture.

As demand for her products increased, Laura realized it was time to graduate to a baked goods shop. In August 2012, Scratch Bakes moved to an 800-square-foot space at Brickerville House Specialty Shops. Within a year, the business outgrew that space and moved to its current location on West Main Street, where it makes its home in the historic three-story brick Queen Anne-style Mentzer building that was built in 1889. “We’ve grown into our current space, and our menu grew with the space,” Laura explains.

Initially, Scratch Bakes was located in a smaller space that featured a lone display case for baked goods. The menu was expanded in 2015 to include scratch-made soups, sandwiches, wraps, salads and sides. A year later, additional space in the building became available and Laura, her husband, Jason, and their children took on the renovations to transform the space into a cheery seating area that comfortably seats 50.

Today, Scratch Bakes is a light-filled area with tall windows, lofty ceilings, art deco-style pendant lights and track lighting. Seating is a combination of tables and a casual seating area. A wide front porch can seat about 12. A lower-level seating area, which can accommodate 25, includes a play area for children. “I have four kids, so I know what kids like; that’s why we have the play area,” she explains. “We really want people to feel welcome.”

The lower-level area is also used for event space. The main dining area can also be booked for private parties after hours. In addition, Scratch Bakes offers take-out and catering (both in-house and delivery to local businesses).

“It’s been amazing,” Laura says of Scratch Bakes’ journey. “Some customers will come in and tell me they remember picking up items at my home. We also have a number of customers who have celebrated a series of milestones with us with cakes or cupcakes – a proposal, a bridal shower, the wedding, a baby shower, anniversaries and children’s birthdays. Some people even come in for their birthday every year. It’s really neat to be part of the celebrations in people’s lives,” she says.

As for cupcakes, there are eight “everyday” flavors – Chocolate Vanilla, Vanilla, Red Velvet, Triple Chocolate, Peanut Butter Lover, Salted Caramel, Cookies N Cream and Chocolate Top – as well as three specialty flavors that rotate daily. Some of the specialty flavors include Key Lime Pie, Bananas Foster and Strawberry Shortcake. While all the flavors are yummy, the top seller is Salted Caramel, and it’s the flavor Laura started out with. The second-most popular flavor is Peanut Butter Lover. For those who were wondering, Laura reports that Martha Stewart ordered Triple Chocolate. There’s also the popular PupCup, a dog biscuit that takes the form of a cupcake. The baked goods selection also includes brownies, cookies and muffins. Gluten-sensitive flavors are also available on a daily basis. Scratch Bakes also offers a café menu featuring breakfast items such as toasted bagels, sandwiches and burritos. For lunch, salads, house-made soups, wraps, grilled ciabatta sandwiches and an assortment of sides are offered. Combos are available, as well. Kids’ meals are also on the menu.

As for beverages, the choices include coffee, latte, juice, water, milk, iced tea and lemonade.