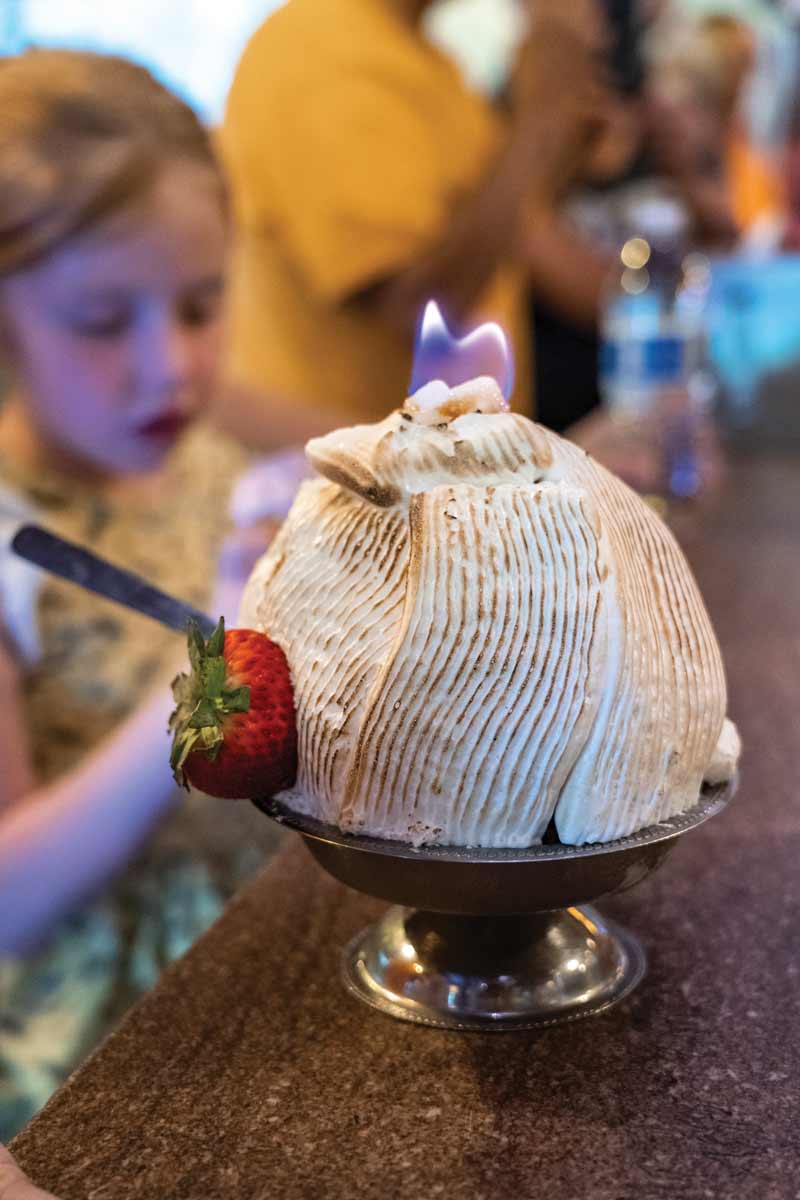 This Mount Gretna landmark is the perfect place to enjoy a refreshing treat, whether it’s an ice cream cone, a soda, a milkshake, a sundae or birch beer served in a frosted mug. But, before you indulge, check out the lunch/dinner menu that is filled with salads, wraps, burgers and other summertime favorites.

The Jigger Shop has changed hands only six times since it opened in 1895. The present owners are the Seyfert family – Beth and Paul; Paul’s brother, Leon Seyfert, and his wife; and Leon’s son and daughter-in-law, Kyle and Kortni Seyfert. The Seyferts purchased the restaurant in May 2018 from another family, the Allweins – Chuck, Charlotte and their son, Drew, and his wife, Linda – whose tenure extended from 1963 to 2017. Paul was part of the Allwein team – he had served as the restaurant’s manager for 15 years. Both he and Beth are educators. Paul teaches social studies at Lebanon Senior High School, while Beth is a librarian at Hempfield High School. “This is perfect for us – there is a bit of overlap with the beginning and end of the school year, but we make it work. Plus, Paul’s dream has been to own a restaurant,” Beth remarks, adding that each family member brings something different to the business. For example, Leon and Kyle are farmers and know how to repair a lot of things. Their 140-acre farm is also home to Seyfert’s Corn Maze, a seasonal agri-tainment venture operated by Kyle and Kortni. Other Seyfert family members include all three of Beth and Paul’s children. “They’re now in college, but they started working here when they were 14 years old,” Beth says. Nostalgia is part of The Jigger Shop’s allure – its roots can be traced to a traditional Mount Gretna cottage. It remains a place where you can relax, indulge and enjoy nature. In order to capture the ambiance of an old-fashioned ice cream parlor, Beth points out that The Jigger Shop does not have Wi-Fi. “We want it to be a family experience,” she says. “We want guests to talk with one another rather than focus on their phones.”

In order to maintain its charm, aesthetic changes have been incorporated gradually. The interior was expanded, and a deck was added in the ’70s, which brought seating capacity to about 250. Trees that surrounded the area were incorporated into the deck and its outer edges. About 20 years ago, a canopy was installed over part of the deck; radiant heaters in the roof of the canopy help to take the chill off cool evenings.

Because no changes were made to the restaurant last year, the transfer in ownership was really not apparent. However, this year guests will notice some changes – many were based on review comments on social media. “We read the reviews and comments and looked to see how we could improve,” she explains.

One of those changes is operating hours. The Jigger Shop has traditionally been open Memorial Day to Labor Day, but this year it opened Mother’s Day weekend and was open weekends (Friday, Saturday and Sunday) in May. It will also remain open through September, switching back to weekends only after Labor Day. “Our opening on Mother’s Day was well-received, so we’ll keep the same schedule for next year,” Beth notes. Summer hours are also more consistent: daily, 11 a.m.-10 p.m. One thing that hasn’t changed is the fact that the ice cream parlor is a bustling place, and there’s often a line to place an order throughout the day and night. However, this year the traffic flow has been improved thanks to a second entrance ramp that was added to the deck to facilitate entering and exiting from the restaurant.

Lines for food and ice cream have been separated; each line now runs along the perimeter of the inside area. Hand-held menus are also available to pick up near the entrance to the deck. “If the line is long, people can’t see the menu board. With the hand-held menus, they can be ready to place their order when they get to the counter,” Beth says.
Since it opened, The Jigger Shop has been known for outrageous ice cream desserts. Baked Alaska is served flaming, as is the Campfire S’more Sundae and Sticky Bun Flambé (beignets used in the dish are made on the premises).

There’s also the traditional banana split and some special sundaes that combine touches of Lebanon/Lancaster County with tasty ice cream – namely, Shoo-fly and Whoopie Pie sundaes. Beth says the sundaes started out as monthly specials and were so popular they were added to the menu. Of course, the signature sundae – The Jigger – remains a customer favorite. Legend has it that two girls attending a campmeeting in the early 1900s visited the soda fountain and asked the waitress to make them “something different.” They loved the sundae concoction she created and on subsequent visits asked for “the jigger.” The sundae became a sensation and provided the ice cream shop with its now-famous name. The tasty Jigger is two-and-a-half scoops of French vanilla ice cream made with your choice of chocolate or butterscotch topping, whipped marshmallow and the secret ingredient – Jigger nuts.

Although most people associate The Jigger Shop with ice cream, its food menu includes soup, salads, wraps, burgers and sandwiches. There is also a children’s menu. Beth says the most popular item on the menu is the Carolina vinegar-basted pulled pork. Burgers are also popular, and this year there’s a cheeseburger wrap as well as a burger of the month. “We already had a cheeseburger. People sometimes are looking for an option with less bread, so we added the cheeseburger wrap. Many of the additions were like this one – a minor tweak to something already on the menu,” she explains.