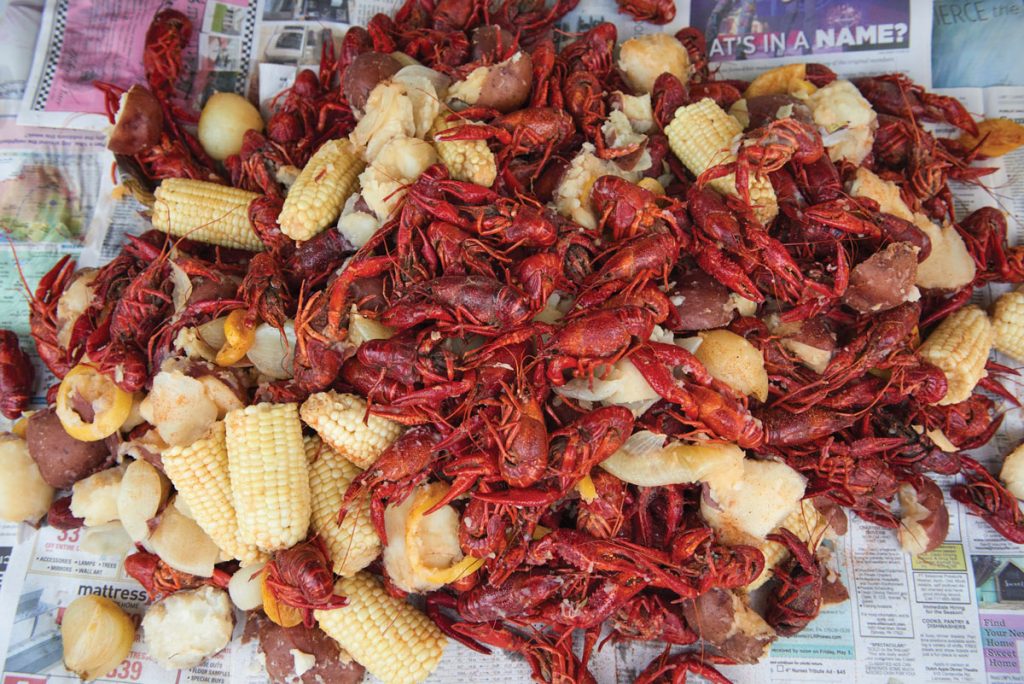 It’s probably safe to say we’ve all been cooking up a storm at home over the last few months. No doubt, you were missing your favorite restaurants that specialize in farm fresh, regional and international fare. And, with summer approaching, you’ve probably been thinking about your favorite vacation destinations and the restaurants you always frequent. Who knew what we would be facing when I drafted this copy last spring, only to revise it in mid-March to reflect the message: if you can’t travel to enjoy your favorite food, you have the option of having the food delivered to you. Dreaming of food always takes me to Louisiana and the traditional crawfish boil. I don’t get back there as often as I’d like, and this spring holds little promise of traveling there anytime soon. Instead, I try to recreate the tastes of one of my favorite places on Earth at our home in Ephrata.

If ever there’s a relaxing way to spend a springtime Saturday, it’s peeling crawfish shells for hours on end with friends (or, in the age of coronavirus, all by your lonesome). Corncobs, quartered potatoes, lemons, heads of garlic and an array of spices accompany crawfish (and perhaps sausage) in a large pot over a roaring propane flame. As I’ve discovered, preparing this time-honored Southern feast is possible even in the North.

Yes, it’s an undeniable struggle to source crawfish comparable in quality to the local “mudbugs” of the Pelican State. Once you’ve had them, nothing else compares.

Truth be told, crawfish, which are a staple throughout the Gulf Coast, have had a difficult time finding a dedicated following outside of that region. In unlikely attempts to scratch the itch, I’ve tried peeled and frozen crawfish that are often shipped frozen from overseas. Sourcing them locally is nearly impossible. These frustrations were shared on one occasion with a New Orleans friend who moved north from the “504.” We got each other wound up recounting the joys of Crescent City cooking, the kind of heartache that can only be soothed with a home-cooked meal. Unable to compromise, we decided to hold a boil ourselves and began to research sources in Louisiana. When you can’t go to the food you want, bring the food to you.

Crawfish availability is seasonal – starting early in the calendar year, with peak season arriving between March and May. Tourists who visit outside of that timeframe are disappointed to learn they can’t order five pounds of fresh crawfish.

What are crawfish? They are freshwater crustaceans that resemble small lobsters, hence their nicknames, freshwater and mountain lobsters. In Louisiana, they thrive in swamps, ditches, running streams and paddy fields. In this area of the country, we call them crayfish, while in the West, they are referred to as crawdads. In Louisiana, they are considered an agriculture product, yielding more than 120-million pounds a year. In April and May, they are the “soul” of community-based crawfish boils. (Picture a crab feast, only messier and more boisterous.)

Unfortunately, coronavirus is affecting the industry. What appeared to be a banner season (because of plentiful rain and warm temperatures) has hit a major roadblock. By late March, New Orleans had become a coronavirus hot spot (the spread of the virus is being attributed to crowds on hand for Mardi Gras celebrations). Because restaurants were closed and offering only take-out, demand for crawfish fell. Coupled with that, the processing plants were seeing labor shortages. The only good news was that prices were declining.

When I lived in Louisiana, in-season crawfish were served cooked for a few bucks a pound, much lower than the early season rates for smaller-sized mudbugs. As we discovered, shipping live crawfish comes at considerable cost.

When placing a live crawfish order (peruse the Internet and you’ll discover dozens of companies offering such services), there are a few deceivingly appealing options for the price-discerning customer. Field-run crawfish are pulled directly out of traps and then tied off in sacks without cleaning or sorting. Covered in grass and mud, it saves the added time and expense of grading crawfish by size. Here’s the rub: field-run orders may include surprise bonuses in the sack which may slither, bite or pinch differently than what you’re paying for.

Save yourself the trouble and order a washed and graded sack. If possible, have your order scheduled for delivery on the day of your boil. Overnight shipping is an essential expense and worth embracing in order to lower dead loss. Yes, it will increase the cost but more of the crawfish you bought will survive the trip. In selecting the total amount of weight for your order, four to five pounds of crawfish per person is a healthy portion for those who love peeling. Similar to a lobster, crawfish meat is found primarily in the tail, so don’t underestimate the total weight. We ordered 30 pounds of crawfish from a company in Branch, Louisiana – for six people – which was plenty, knowing some folks would peel more than others.

You’ll also need a large stockpot. According to TigerDroppings.com, a Louisiana State University sports fan forum with plenty of tangent discussions, an 80-quart stockpot is one of the most popular sizes for larger boils. Smaller stockpots with baskets can be put to work with smaller batches – simply add more seasoning between each round.

Ensuring you have enough propane in the tank to get through the boil, a high-pressure burner is the last main component you’ll need.

Upon delivery, give the crawfish a rinse in their shipping container, being sure to carefully punch holes for drainage at the bottom, as they will otherwise drown. Large coolers with open drains are essential for rinsing the opened sack of crawfish, for storing hot crawfish after the boil and for the cold beverages of your choice.

Wash and prep whole potatoes, onions and corn. You’ll also need sliced lemons. My library of Junior League cookbooks from the South simply detailed adding salt, pepper and cayenne in the boil. Fortunately, our order of crawfish included a healthy supply of seasonings. Keep hot pads, a long stirring paddle or spoon and a clean cooler for cooked crawfish near the burner.

Of course, shrimp would be an alternative to crawfish. Frozen, fresh and peeled shrimp are less intimidating, readily available and less expensive. You’ll waive some of the core experience and the price is worth taking a second look considering the volume required, but they are a worthy substitute for the methods mentioned here.

Serve the feast buffet-style or spread it out on a table atop clean newspapers. Taking in the excitement and all of your hard work, the spread is an uncommon sight for many. While approaching the feast laid out before us, one friend exclaimed, “This is like a summer Thanksgiving!”

Shortly after everyone took their seats, anticipation turned to complete silence. The marathon meal got underway with a leap forward as everyone dug in. As hands turned orange to red with the savory spices of the boil, phones remained absent and out of sight. For a few hours, we ceased to look up lyrics to that song from 1991 or the actor from that movie as we were practically handcuffed to our feast.

Thanks to the slow pace of peeling, the feeling of being stuffed never really sets in (again, similar to crab picking).

Kent Falls Brewing Co.’s (Connecticut) Partagé was on tap: a tart, fruity American farmhouse ale that was exceptionally light and reminiscent of a full-flavored lemonade. Incredibly, we ended up with extra crawfish, which we peeled as a group and stored in the refrigerator. At this point, everyone was in the zone and many hands made for swift work. We discussed at length what we’d do with the leftovers: crawfish etouffee, gumbo … the possibilities were endless. Unsure how it would be received, almost reluctantly I brought up the most memorable crawfish dish I’ve ever experienced. It’s one meal I’ve missed terribly and savored during a Sunday brunch at The Chimes in Baton Rouge: Stuffed Seafood French Toast. Words cannot convey how decadent it was.

So, it was unanimously decided that Sunday brunch was the only way to go. The next morning, we sliced French bread loaves lengthwise, dipped the pieces in a batter of milk, eggs and sugar and fried them on a hot skillet. Crawfish were heated in browned butter with leftover seasoning and then mixed into chilled cream cheese to form the perfect consistency and temperature. Matt Jordan, who hosted the crawfish boil with his wife, Sarah, took it further, making a deliciously simple drizzle with honey, Crystal Hot Sauce and seasonings.