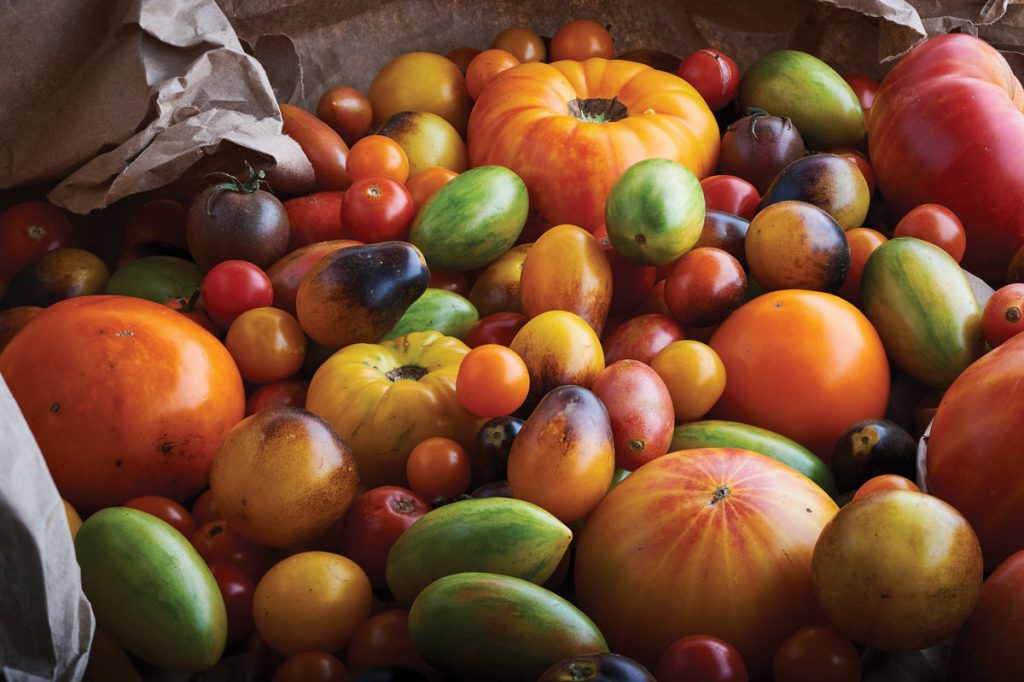 Every kid has at least one food item they consider comparable to Superman’s kryptonite. Mushy Brussels sprouts, overcooked carrots, soggy cauliflower … yuck! One of my aversions that persisted for way too many years is the tomato.

Strangely, I have always loved my grandmother’s stewed tomatoes. I also love tomato sauce. Oh, and cherry tomatoes with mozzarella and fresh basil, drizzled with 25 Star balsamic from Modena. Wait, I thought I hated tomatoes?

My appreciation for tomatoes has grown since I’ve begun taking cooking and good food seriously. As a result, I’ve come to discover that tomatoes are one of the most versatile fruits/vegetables on earth. (Either category is correct: the tomato’s berry-type “fruit” contains less sugar than most fruit and therefore qualifies as a veggie.) You can eat them raw or stewed. They can be pickled. They can be stuffed. They are key ingredients in salads, sandwiches, sauces, juices, jams, pies and soups. Fortunately, there’s a tomato for all scenarios. My aha moment came one autumn while ordering a sub from a local market. The sandwich that I normally looked forward to was the worst I could remember. I ultimately blamed it on the tomatoes. The once-juicy, deep-red fruit had been replaced by refrigerated specimens shipped in from warmer climes. They were flavorless, with an anemic, crystalline texture reminiscent of a sad cherry slushy depleted of its sugary bliss. It was under-ripe tomatoes I detested all along, but might it be something more? Like all fresh ingredients, such characteristics as flavor or texture depend on quality and variety. The tomatoes at the local farm stands I frequent look quite different from the singularly red, commercially grown varieties you see at the supermarket, although they are doing a better job of adding local product to the selection during summer months. Conversely, heirloom tomatoes offer a brilliant rainbow of coloration – purple mixed with yellow, green and gold, red and orange, and shapes large and small.

What makes heirloom tomatoes so strikingly different? The first difference is how they are produced. They are open-pollinated, meaning the resulting seeds will produce tomatoes that look and taste exactly the same as they did 100 (or more) years ago. They have also become part of this country’s culinary folklore, bearing names that relate to location, who developed them and who passed them on to family and friends.

The famed Mortgage Lifter is probably the best known. Developed in the 1930s by M.C. “Radiator Charlie” Byles, a gardening enthusiast from West Virginia, the Mortgage Lifter is a result of Mr. Byles planting four large varieties and crossing one with the pollen of the other three. By season six, he had developed a tomato so renowned – a huge beefsteak that can weigh up to four pounds – that people traveled from miles around to purchase the $1 plants he sold. After six years of selling his plants, Mr. Byles had saved $6,000, enough to pay off his mortgage.

This country’s Bicentennial helped to foster an interest in heritage gardening and along with it, organizations such as Seed Savers Exchange (Iowa), Thomas Jefferson Center for Historic Plants (Virginia) and locally, the Heirloom Seed Project at Landis Valley Village & Farm Museum. I spoke with Joanne Ranck Dirks, the Heirloom Seed Project’s coordinator, who explained that being a farm museum, and a working one at that, Landis Valley put out a call to the community 34 years ago requesting seed donations of any sort that have been passed down through generations. According to Joanne, “Some of the seeds we received in 1986 we continue to preserve. We can easily document some of these back 100 years; that’s only four or five generations.” Indeed, stories abound of immigrants who arrived with very few possessions. Those who had seeds, considered them to be gold.

Joanne explains that heirloom tomatoes are open-pollinated, planted using seeds unaffected by hybridization. Heirloom tomatoes are “generally indeterminate – they continue producing right up to frost. Sometimes your hybrids have been bred to be determinate – you get a big harvest all at one time. That’s what you would want if you’re a commercial grower or canning tomato sauce.”

As shipping practices and how food is produced commercially change, so, too, have the choices of tomatoes grown. According to Doreen Howard, author of Heirloom Flavor: Yesterday’s Best-Tasting Vegetables, Fruits, and Herbs for Today’s Cook, “World War II, and the need to feed a war-decimated world afterwards, triggered rampant hybridization. Canneries required uniform size and sugar content. Expansion of the rail system and other distribution methods also gave rise to the ability to offer hybrid tomatoes in January for Chicago grocery stores.”

Joanne adds that one of the trade-offs of hybridization is flavor loss. “Plant breeders have bred out a lot of foliage to produce a smaller tomato plant. You lose some of the flavors. Heirlooms are such winners when it comes
to flavor.”

Seeds with an old, pre-war provenance – grown by one family for many years – are ideal heirlooms. Through Landis Valley’s Heirloom Seed Project, you’ll find such heirlooms as Amish Paste, Cherokee Purple, Green Zebra, Mortgage Lifter, Red Brandywine and San Marzano, among others.

Landis Valley Museum is always accepting donations of heirloom seeds to add to their library, through which they are cultivated and preserved. This year, Landis Valley listed 29 unique varieties of heirloom tomato seeds available for public sale at $3.50 a package, plus a nominal shipping and handling fee. (Seeds can be ordered by mail or online in late winter and early spring.) Unfortunately, one of the museum’s largest fundraisers, the Herb & Garden Faire, which is always held the second weekend in May, had to be canceled due to the coronavirus pandemic. The Project makes plants available for purchase during the event. So that the plants would not go unsold, the museum set up an online event with curbside pickup. All available plants sold out in a matter of days, thus providing the Heirloom Seed Project with valuable “seed money” that will contribute to its operating costs. For more information, visit landisvalleymuseum.org.

Looking Back to Look Forward

Tomatoes originated in the Andes Mountains of South America, where they grew wild. Joanne surprised me with the notion that, historically, tomatoes are a relatively new kid on the block, explaining, “The tomato as a plant origin goes back to South America, Central America and Mexico, so it had to go first to Spain, then to Italy, then to northern Europe.” The tomato first grew in Italy around 1550. “Many of our early immigrants didn’t know what tomatoes were in the 1700s; when they came here, people in this region did not grow tomatoes.” Seed companies made them available in the United States by the 1800s. Nonetheless, according to Joanne, they were rarely eaten fresh. “They are in the nightshade family, so there was a fear there was a poisonous element.”

Texas A&M’s AgriLife Extension makes note that, “Not until after the Declaration of Independence do we find any record of the tomato as being grown by white men in this country. Thomas Jefferson, a remarkably progressive Virginia farmer as well as a statesman, grew it in 1781. It was supposedly introduced to Philadelphia by a French refugee from Santo Domingo in 1789 and to Salem, Massachusetts, in 1802 by an Italian painter.”

In the 1930s, tomatoes were a major industry in the Washington Boro area – as many as 200,000 plants were being grown – prompting a co-op to be formed. The ideal conditions – nutrient-rich limestone soil, warm days and cool nights (courtesy of the Susquehanna River) – created a natural greenhouse. The Jet Star, a sweet, flavorful, low-acid tomato was the best performer.

A decade later, the industry was floundering. Employees who had answered the call to fight in World War II, found other ways to make a living upon their return. A handful of growers carried on. Steve Funk was one of them. Supplying some local grocery chains with tomatoes kept the family’s wholesale operation in business. However, a wet summer – the Jet Star’s enemy – in 1987 proved disastrous. Inferior tomatoes prompted wholesale customers to cancel their orders and the auction house bought only a fraction of what it had been buying. On top of that, Washington Boro’s famed tomato festival was washed out.

Steve turned to prayer. Guidance from above told him to open a roadside stand. On a day in July, a crew from WGAL8 arrived to do a live story about the tomato festival. They mistakenly set up at Steve’s roadside stand. When they received word they were at the wrong place, it was too late to move. The festival’s spokespersons had no choice but to come to the stand for the live interview. Steve was given the opportunity to say a few words and he invited viewers to come to the stand and sample what he deemed to be “the best-tasting tomatoes around.”

The next day, Steve sold $800 worth of tomatoes (compared to $50 on an average day). From there, it was full speed ahead. The roadside stand expanded into the renowned Tomato Barn (Route 999, you can’t miss it), which sells the famed Washington Boro Jet Star tomatoes (as well as all sorts of tomato products) and produce such as corn, beans, peppers and melons. Wholesale customers returned, including grocery stores, markets, restaurants and senior-living communities. A new generation – Steve’s daughter, Jen, and her husband, Tyler Rohrer – oversees the business, adding a CSA to the offerings.

By the way, according to the Tomato Barn’s Facebook page, you can expect crops to be two weeks behind schedule this summer due to the weather, which probably means no local corn or tomatoes for the Fourth of July.

How Does Your Garden Grow?

As a result of the pandemic, many households have started gardening for the first time. By now, your plants should be established. Keep weeding! If you don’t weed, your production goes down.

Heirloom tomatoes have heavy, full foliage, so they need support. You’ll get better tomatoes if you stake them. Tomato cages are an ideal way to keep tomatoes off the ground.

Adding organic mulch such as straw will retain moisture for less frequent watering. Be careful not to overwater mulched tomatoes, as that can lead to Fusarium wilt, causing leaves to yellow and wilt. Fungal disease can frustrate many a gardener. Fungal spores live in the soil, and as rainwater splashes up from the earth, it carries spores to the tomato plant. Early blight is a fungus that works its way up from the bottom of the plant, causing healthy leaves to become spotted and wilted. Late blight, which affects plants mid-to-late season, is an airborne fungus. To prevent it, crop rotation is helpful, as is watering at the base of your plants with a soaker or bucket-fill nozzle. If the fungus strikes, removing infected leaves and keeping plants tidy may help your yield.

Under-ripe tomatoes only need time to reach their full potential. Store them on a counter out of direct sunlight – not in the refrigerator – to transform a tomato from zero to hero. Under-ripe tomatoes lack the delicious, satisfying qualities of a developed, ripened tomato, requiring added warmth.

If you need to buy more time for an already ripe tomato, refrigerate it. The characteristics of a ripe tomato will only be prolonged. Too late? It sounds like you’ll be enjoying stewed tomatoes for dinner.

Large, ripe heirloom tomatoes, bordering on overripe, are juicy and full of flavor, tasty enough to steal the limelight of a well-prepared dish. A tender, meaty tomato should have the juiciness of a watermelon, which, akin to tomatoes, also gets its deep red color from the antioxidant lycopene.