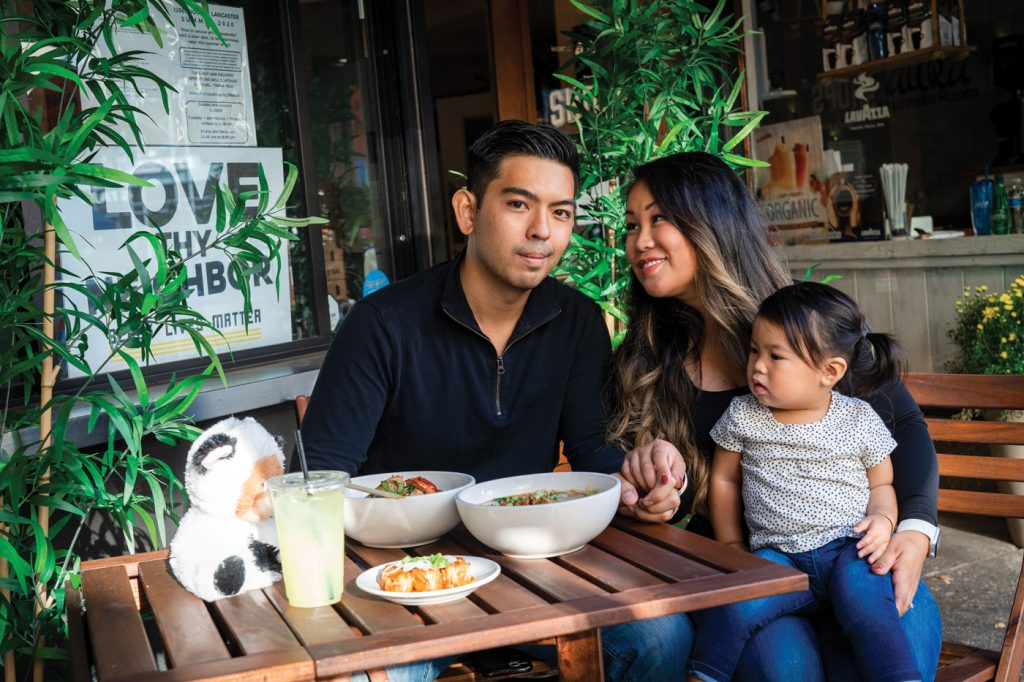 ArchiveAsian-FusionLCM Articles
Posted on June 14, 2021 by Rochelle A. Shenk and Photography by Nick Gould in Archive · Asian-Fusion · LCM Articles

Originally published in the November 2020 issue of LCM

Over the last eight months, Andre and Donna Pham have learned to go with the flow – their restaurant’s tagline is “Peace. Love. Ramen.” – and meet the challenges of the Covid pandemic in order to keep Issei Noodle operating.

Despite being closed for in-restaurant dining, the 70-seat eatery in the heart of Lancaster’s downtown has continued to serve its customers by ramping up its take-out and delivery options. In looking back, Donna notes that Gov. Wolf’s mid-March order to close non-life-sustaining businesses couldn’t have come at a worse time: The restaurant was fully stocked for what is typically a busy time. “There’s usually a really big convention at the Lancaster County Convention Center right at that time, and we had just received all the deliveries to handle the expected crowd. Then, we had to shut the doors,” she explains.

Locals and visitors alike have helped to make Issei Noodle a downtown dining destination. The Asian-fusion menu reflects the family’s Japanese, Vietnamese and Thai/Laotian culinary traditions and focuses on various styles of ramen, as well as pho and rice dishes. Issei’s hallmarks are quality ingredients, authentic flavors and fresh produce.

With the mid-March decree, the restaurant’s focus switched to take-out and delivery. Issei Noodle already enjoyed a brisk take-out business and relied on DoorDash for delivery service. In anticipation of added demand for delivery, it quickly expanded to include Grubhub and Uber Eats. The Phams also partnered with Commons Food Hub. The Commons Company, which operates several food and beverage businesses, including Prince Street Café and Passenger Coffee, manages the online service with curbside pickup available in either downtown Lancaster or Lititz. Items are from local purveyors and include a variety of perishables, dry goods, prepared food and even some libations.

“We already have a system in place for doing prepared food since we have a stand at Central Market,” Donna says of Dozo by Issei. “We also have the packaging for both take-out and prepared food. In fact, once we switched to take-out, delivery and the Commons, we reorganized the dining room to make room for the cases of take-out containers we’ve been using. It’s a bit sad to see the once-busy restaurant stacked with boxes, but it’s a way for us to get by. We’ve kept in contact with a lot of other restaurant owners, and we’re all experiencing challenges.”

Unfortunately, the Lancaster Central Market stand, which opened in June 2019, is now closed. The couple most likely will not reopen it. “We loved being part of Central Market – the other standholders and the shoppers welcomed us. We talked with our staff to gauge their comfort level about reopening and some were hesitant about working due to their own family situations,” Andre explains.

“When we opened Issei here, we had talked about having a stand at Central Market and we were fortunate to have that happen,” Donna adds. “We know there’s a waiting list for stands and would like another entrepreneur to have the opportunity that we did.”

The couple is also not certain when they’ll reopen the restaurant’s dining room due to concerns about the health and safety of their staff. “Our staff is like our family,” Donna says.

Like many restaurants, Issei Noodle is a family affair. Andre grew up in the restaurant business – his parents, Robert and Naomi Pham, launched Issei Noodle in Carlisle in 2008. Robert was born in Laos and his family immigrated to the U.S. as refugees to live with family and grandparents when he was about five years old. He grew up in the Camp Hill area. He enlisted in the Marines and was assigned to a base in Okinawa, Japan, where he taught English lessons to the locals in his free time. One of his students was Naomi, who wanted to perfect her English so that she could better communicate with visitors at the gift shop where she worked. They married in 1986 and started a family in Okinawa. Robert then made it his goal to learn Japanese, so that he would have an easier time finding employment.

Both coffee lovers, they took a leap of faith, did extensive homework, made contacts and launched their first brand – Seattle Espresso, which they successfully operated for 15 years. They moved to the states when Andre was about 10 years old, settling in Camp Hill, where they opened a coffee shop. In 2008, they shifted direction and opened Issei Noodle – long before ramen was a trending food. That restaurant is now under the leadership of their daughter, Chane, and her husband, Jonathan.

Donna and Andre both grew up in Camp Hill and, while they attended different schools, they were acquainted with each other. As college students, they shared dreams of operating their own businesses and agreed to join forces. They left their respective colleges in order to explore the idea of opening a restaurant. They launched their enterprise in 2011 (partnering with a friend) with pop-up dining experiences on Pitt Street in Carlisle. Two years later, they moved to Lancaster to open a second Issei Noddle, which started as a take-out window due to a government shutdown postponing the release of their funding from a business loan. The restaurant opened in 2014.

The Phams were married in Steinman Park in May 2018. Now, a third generation is on scene. Pre-Covid, Andre and Donna’s two-year-old daughter, Luna, could be found at the restaurant with her parents. “Our customers will have a chance to watch her grow,” Donna says.

The Phams also believe in extending a helping hand to others by giving back to their community and their roots. Andre has been involved in mission trips and the family’s restaurants donate funds to a Christian orphanage in Thailand. “My grandfather was raised in an orphanage in Thailand,” he explains. “Two summers ago, my parents took a trip and searched for the orphanage. They didn’t find the exact orphanage where he was raised – it may no longer exist – but they did find one nearby. We’ve supported that orphanage ever since.”

“We’re so glad we’re able to help where we can,” Donna adds.

Issei Noodle’s Lancaster location can be found at 44 N. Queen St. Dine-in service is not currently available. Take-out and delivery only. Call 717-449-6800 or visit isseinoodle.com and Facebook.