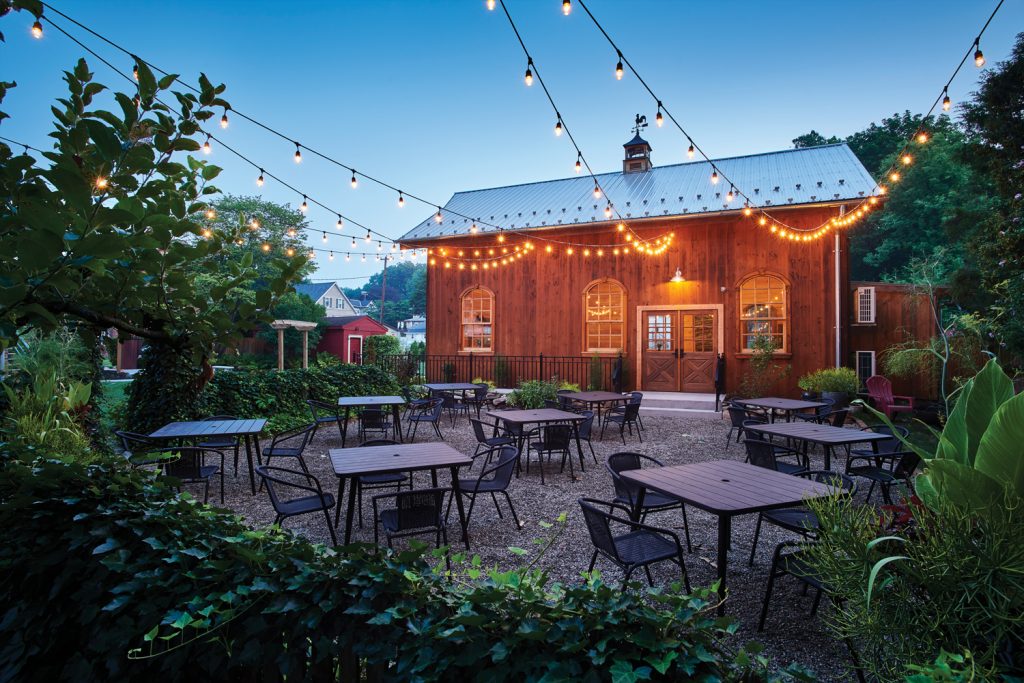 Originally published in the September 2021 issue of LCM

Built in 1823, the Railroad House has survived catastrophic floods, the effects of war, a depression, prohibition, economic downturns and a barroom brawl or two over the course of nearly 200 years. When it remained closed during the summer of 2020, fans feared the pandemic had derailed it. Put your fears to rest … the Railroad House’s future is on track to move forward!

Actually, the pandemic allowed co-owners Freddy States and Joey Bowden to take a break and map out the future of the Railroad House. “Even before the pandemic, the wheels were moving to make some changes we had on the drawing board,” Joey explains. “In March [2020], we looked at the mandated closure as an opportunity to make our move and not sit idle. We took advantage of the downtime and were finally able to get projects off the ground and also get work done on our never-ending ‘to-do’ list. This is an old building – it seems like things constantly need to be fixed.” He estimates that 60 to 65 hours a week were spent working on projects over a nearly six-month period before the Railroad House reopened in the fall of 2020. “The only area that didn’t get a makeover was the main-floor bar and dining rooms,” Joey reports.

When other restaurants reverted to offering take-out service, the Railroad House remained closed so that projects could be completed. “It was easier to forge ahead and just push through,” Joey explains. When outdoor dining was permitted, the Railroad House’s beautiful patio was in the process of being renovated. “We took out all of the 4,200 bricks and re-laid them in order to eliminate the issue of wobbling tables,” Joey notes. New concrete walkways that skirt the building and lead to others on the property were added, as well. New patio furniture was purchased. Bradley Hagens, who works at the Railroad House and once helped to care for the gardens at Doneckers, added his expertise to freshen and redesign the landscaping.

On the upper floors of the inn, they began the process of refurbishing the guest rooms. “They really needed it. I bet they hadn’t been updated in 40 years,” Joey says. “They had become a mish-mash of styles.” Now, the guest rooms are light and airy thanks to the modern color schemes that serve to showcase the architectural details in each room.

The Perry Street Cellar, which always bears the brunt of flooding in Marietta, was given a thorough cleaning and update. “We went over that top to bottom,” he notes. With its emphasis on craft beer and pub fare, the space has become a favorite place for casual dining, musical entertainment, fundraising events and wedding-related activities such as engagement and bachelor parties.

The Railroad House has always been a popular wedding venue. “We’re unique,” Joey says of the historic buildings and beautiful setting. “We were doing micro-weddings before the concept even existed.” When micro-weddings began trending locally about four years ago and were a personal preference rather than a pandemic necessity, Freddy and Joey were on-board, as they had already begun to make plans to convert a carriage house on the property into a wedding venue. The renovated, climate-controlled carriage house, with its soaring ceiling, window-filled walls and wrought-iron chandeliers, can comfortably accommodate 50 to 60 guests and offers such amenities as a bar, a secret-garden-like patio, private bathrooms and, of course, an on-site caterer.

Another building on the property – the original summer kitchen – has also been given a new lease on life. It’s always presented owners with the dilemma of how to utilize it, so it has largely stood empty. “I know a previous owner used it as a guest house but since it’s located right next to the patio, it’s not very private. Freddy and I butted heads over this one,” Joey shares. “He saw it as a bridal suite, while I saw it as a private dining room.” Joey’s vision won out and the refurbished summer kitchen now functions as a private dining room that has a seating capacity of 15 to 20 guests. “It’s a nice option for events such as showers, anniversary and birthday parties, very small weddings and even small corporate dinners,” Joey points out.

The expanded emphasis on weddings and other special occasions prompted Freddy and Joey to add a wedding coordinator to the staff. “We’re learning a lot about weddings – namely, it takes a lot of legwork to plan and execute one,” Joey admits. “As two guys who barely took part in helping to plan our own weddings, we knew we needed help. Fortunately, we were able to bring Lauren Kurzik on staff. She brings experience – Lancaster Country Club – and a background in restaurants to the Railroad House, plus she lives in Marietta.”

Joey and Freddy are grateful for Lauren’s expertise. Like other venues, the Railroad House is doing its best to accommodate weddings that were canceled or postponed in 2020, as well as host those that were booked for 2021. As a result, weddings are being held at the Railroad House (and across Lancaster County) not just on weekends but throughout the week. “It’s been a little crazy,” Joey attests. And, with fall fast approaching – the most popular wedding months in Lancaster County – the schedule will undoubtedly remain hectic going into 2022.

In regards to Marietta, Joey is excited by the fact that the riverside town is “hitting it just right” as far as moving forward is concerned. “Our restaurants seem to have made it through the pandemic,” he says, noting that when Heart Café closed its doors in early summer (2020), York native Molly Fisher took it over and opened a second location of her popular Molly’s Courtyard Café, which specializes in breakfast and lunch fare.

With buildings along Market Street transitioning from apartments to retail and entertainment locations – thanks to entrepreneurs such as Freddy, Steve and Abby Ulrich and others – Joey sees a “walkable downtown” emerging in Marietta over the next five years.

One such entertainment venue is Susquehanna Stage, which makes its home in a large stone church on West Market Street. The expanded space prompted the creation of an umbrella organization called Marietta Center for the Arts. In addition to community theater, plans call for the building to host events such as live music performances, open-mic nights, art exhibits, summer camps and more. The organization has also been working to restore the Marietta Theatre, which dates to 1914.

Of course, Marietta is known for its wonderful holiday tour of homes, which is presented by Marietta Restoration Associates and is one of the oldest (more than 50 years) tours of its kind in the state. Its annual garden tour allows visitors to see yet another artistic aspect of Marietta.

As for recreation, the Northwest Lancaster County River Trail meanders along the Susquehanna River from Columbia north to the Falmouth area, bringing trail users through Marietta. Restaurants and other businesses are definitely reaping the rewards that the trail brings to the town.

The big news is that movement is starting to take place at the train station that sits across Perry Street from the Railroad House. “We’ve been wanting to do something with that for years,” Joey says. Now, thanks to grants already awarded to the Lancaster County Redevelopment Authority and Susquehanna Heritage, Marietta will become a major component of the Susquehanna National Heritage Area courtesy of the adaptive-reuse project that will see the train station become a visitors center and trailhead station along the Northwest Lancaster County River Trail. Everyone along Front Street’s “Restaurant Row” is excited by the prospect of having even more visitors “flood” into Marietta.

Built in 1869, the station has been languishing for years. Plans call for it to be operated by Susquehanna Heritage, the organization that oversees Columbia Crossings and the Zimmerman Center for Heritage near Long Level in York County. The Railroad House is in discussions to operate a casual dining area in the rear of the building. Joey is excited about the design plans architect Wendy Tippetts has shared. “It’s going to be beautiful!” he says. As the grant-application process is nearing an end, Joey hopes to see work begin on the project by 2023, which just happens to be the occasion of the Railroad House’s bicentennial.

Joey is of the opinion that the pandemic “will change the landscape” of what restaurants look like and how they operate. Staff shortages and supply chain issues were a major concern over the summer. “I’ve had to step in on occasion and be the bartender,” he says. “You do what you gotta do to stay open.” Food shortages and rising prices have also been challenging restaurateurs and their staffs. For example, the price of crabmeat prompted restaurateurs up and down the East Coast to remove crab dishes from their menus over the summer. “I’d hate to own a crab-picking restaurant right now,” Joey said in mid-July, adding that lobster prices had escalated as well. “I paid $30 for a just-OK lobster roll in Cape Cod earlier in the summer,” he noted. “That’s nuts!”

What hasn’t changed is the public’s love of dining out. Now, however, consumers expect restaurants to meet their lifestyle preferences. As a result, the Railroad House’s kitchen staff – which is now led by Taylor Heck – strives to keep current with trends (small plates and farm-to-table) and lifestyle choices (vegan and gluten-free), yet offer guests a well-rounded menu that offers everything from burgers (grass-fed beef, of course, as well as black bean for vegans) to what Joey calls “innovative comfort food” that ranges from gouda mac-n-cheese to low country shrimp boil, pork loin, autumn pasta, Norwegian salmon and steaks. An expansive brunch menu is available on weekends. Ingredients provided by local farmers and purveyors help the menu to evolve on a seasonal basis.

Looking to the future, Joey maintains that diversifying will allow the Railroad House to not only survive but thrive. “We want to offer our guests an experience, whether they are having dinner at the restaurant or are having a wedding in the carriage house,” he says. Diversifying extends to offering yoga in the gardens, meditation sessions and wine and beer dinners in the carriage house and trivia contests and get-togethers for vinyl-record enthusiasts in the Perry Street Cellar. “We’re willing to give anything a try!” he says.

In July, after a particularly busy weekend, Joey took to Facebook to thank his employees for a job well done. “I wanted to get out a message of positivity today. As a restaurant owner and someone that also works the day-to-day grind of the industry, I want to shout my whole entire staff out for meeting and exceeding expectations whenever possible. The whole country should understand and appreciate what this pandemic has done to our industry. That being said, I want to shout out my whole staff. They come in with the mindset that we will conquer and today was a shining example. Thank you, Taylor Heck, Chance Boyd, Bradley Hagens, Alexis Strickler and many more!! Small win for the soul!”

Despite uncertainty and the challenges that no doubt lie ahead, Joey maintains a positive outlook. “We’re as strong as we’ve been since opening six years ago,” he says of when he and Freddy became the owners of the Railroad House. “Things are looking up!”

The Railroad House Inn is located at 280 West Front Street in Marietta. Call 717-426-4141 or visit railroadhouseinn.com for more information.