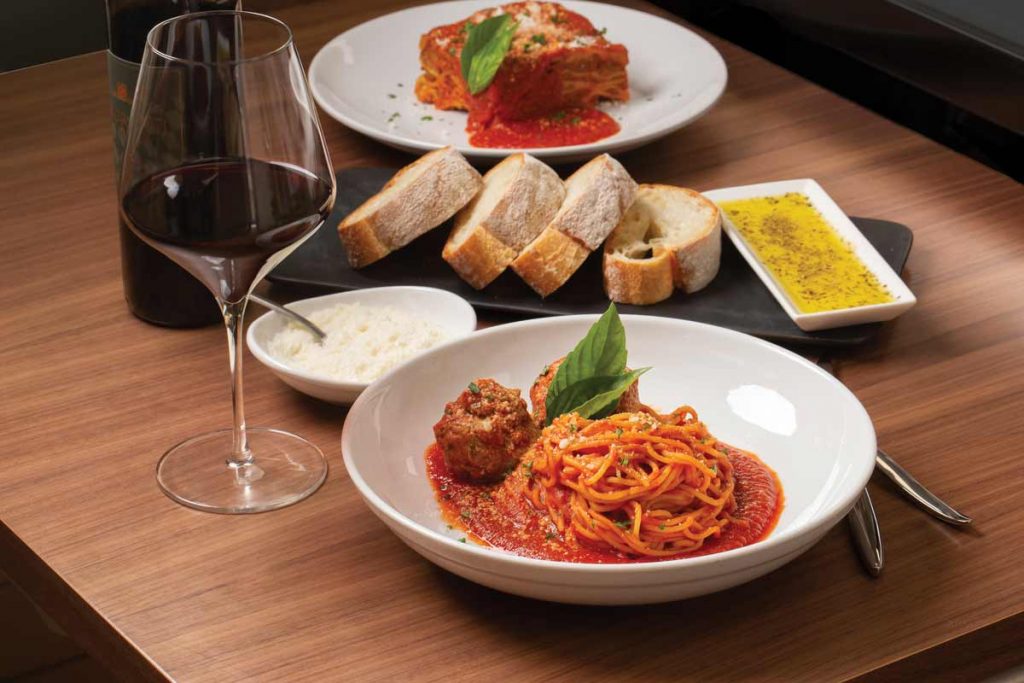 Originally published in the March 2021 issue of LCM

Lombardo’s, the family-owned, classic Italian restaurant that has been a fixture in Lancaster for 75 years, has a new look, vibe and owner. After being closed for a renovation project that took more than 10 months to complete, the restaurant briefly reopened to showcase its new look in November. “The goal is to appeal to our long-time customers, as well as to people who may be trying Lombardo’s for the first time,” says owner Sam Lombardo, who is carrying on the Lombardo legacy with his wife, Dena.

Unfortunately, fans of one of Lancaster’s long-time favorite restaurants haven’t been able to see its metamorphosis. Food service has been relegated to take-out only but Sam anticipates that will change – plans call for the restaurant to reopen for indoor dining on March 2. “The health and safety of our customers and staff are important to us and therefore, we made the decision to offer take-out only,” he says of the restaurant’s reaction to the surge in COVID-19 numbers that began in late fall.

Sam, who is the founder of The Benecon Group, a Lititz-based employee benefits consulting firm, purchased the restaurant in December 2018, in part because he was determined to see Lombardo’s legacy – and family connection – continue. Launched in 1946 by his uncles, Joe, Jim and Dave, the small café benefited from the hands-on help that was provided by their brother, Nick, and sisters, Mary and Toddy. (Aunt Toddy’s recipes are still used today.) Success prompted a move to the Harrisburg Avenue location in 1969, after which a new generation of Lombardos – Sam’s cousins, Paul, Mike and Dave Jr. – became the restaurant’s owners and leadership team.

In a town that has been touted as a bona fide foodie destination, a restaurant cannot survive on its laurels alone. It has to evolve from both a culinary and aesthetic perspective. “We’re a food-loving Italian family and I’m glad I can continue the family tradition of the restaurant, but it was tired-looking,” Sam explains. “It needed a total overhaul.”

The changes in the restaurant’s exterior appearance are almost startling – it doesn’t look like the same place and clearly achieved the objective to “open up the restaurant.” For example, the main entryway has returned to its original location along Harrisburg Avenue. It now has windows! Most noticeable is the fact that the exterior of the building was painted a very modern hue of gray.

The interior was totally gutted. New is a dining room for private parties. A piano lounge was reclaimed from space that once held an office and a coat room. Furthermore, the wall between the bar and formal dining room area was removed in an effort to open up the area. New restrooms were also part of the renovation.

As for ambiance, new furnishings and lighting distinguish the space, while the décor features photographs and artwork that celebrate and pay homage to the Lombardo family’s Italian heritage. (Sam’s father, Nick, was a first generation Italian-American who hailed from the Calabria region of Italy. He met his wife, Jeannette Gavitone, in Naples during World War II and brought her to the United States.) Memorabilia that “pays tribute to family members and the restaurant’s heritage” are also part of the décor.

The kitchen was also updated. Now, the chef and kitchen staff work in a completely overhauled kitchen that provides such amenities as a large pasta extruder. “We make every pasta in-house,” Sam explains. “Fresh pasta has a much better taste. It has a shelf-life of about five days. It doesn’t freeze well, so what we don’t use we donate to Water Street Mission.”

The kitchen also boasts a pizza oven. Sam points out that pizza is new to the restaurant’s menu and he reports that a lot of research went into creating the dough, which is inspired by an iconic Jersey Shore pizza place. Lombardo’s pizza also boasts fresh tomatoes and a unique blend of cheeses.

You’ll also see new faces at Lombardo’s. The “front of the house” is overseen by manager Meredith Thompson, who holds a degree in hospitality from Northern Vermont University and previously worked in restaurants in New York City and the Hamptons. Lombardo’s culinary team includes executive chef John Marconi, chef de cuisine Ryan Stradley, and sous chef Shawn McKinney. They’ve worked together to refine and update Lombardo’s classic menu – lasagna, spaghetti and meatballs, chicken and veal parmesan, and calamari among others – and have added some delicious new items that are in keeping with the Italian style. “We maintain the tradition of using fresh ingredients,” Sam stresses of the elements that define Lombardo’s unique sauce and signature meatballs. “Fresh produce, meats and other ingredients are sourced locally.”

One of the new menu items is arancini – a rice ball with a truffle flavor that’s lightly breaded and deep fried and then served with a house-made fig sauce. Scamorza, consisting of aged mozzarella that’s cut into strips, pan seared and then topped with honey, is a new appetizer. Steaks from aged prime beef are also a new addition. Some sandwiches and panini are available, as well.

Once the restaurant is able to welcome guests, they will be able to toast its return with cocktails, beer and, of course, Italian wine.

Lombardo’s is located at 216 Harrisburg Avenue. Indoor dining is slated to resume March 2 with the following hours: Lunch, Tuesday-Saturday, 11 a.m.-3 p.m. Dinner, Tuesday-Thursday, 4-9:30 p.m. and Friday and Saturday, 4-10 p.m. Take-out remains available, as well. For more information, call 717-394-3749 or visit lombardosrestaurant.com and on Facebook and Instagram.